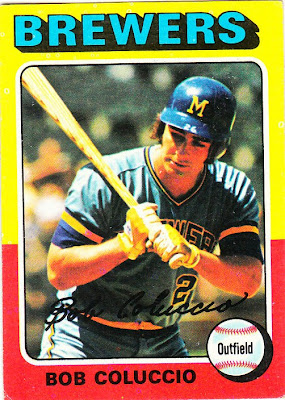 Card fact: This is the middle card in a Topps Bob Coluccio trilogy. Coluccio had just the three for Topps, but they're great ones. They illustrate the metamorphosis phenomenon that was so common in the '70s. Coluccio goes from a clean-cut West Coast kid to a roadie for a rock band.

What I think about this card now: It is a neat, and unusual shot of Coluccio looking the pitch into the catcher's glove. It was rare to get close-ups of game action at this time.

Other stuff: Coluccio was mostly a center fielder for the Brewers, White Sox and Cardinals from 1973-78. His best seasons were in '73 and '74 when he started for Milwaukee. Coluccio was fast, but couldn't get out of the .220s at the plate. Brewers announce Bob Uecker called him "The Macaroni Pony."

After his career, he became a real estate agent. 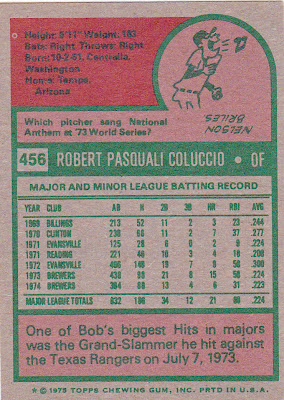 Back facts: Nelson Briles, who pitched for the Pirates at the time, sang the National Anthem before Game 4 of the 1973 World Series.

Other blog stuff: This is a very rare morning post (well, "morning when it's light out"). I forgot to scan the back of the card, and then I couldn't sleep -- no doubt because I was broken up over not scanning the back. So there you are. I apologize for upsetting your routine.
Posted by night owl at 8:23 AM

One of my favorite action shots from the '75 set.

Loved this card. I remember being so excited when the Sox got him. That didn't work out so well.

I remember wondering in the later set in 1976(?) whether the White Sox' Bob Coluccio and the 1975 Brewers' Bob Coluccio were even THE SAME GUY! And Also, kudos to the mentioning of the bad airbrushings....those were my favorite cards!!!!

Great photo. I wouldn't want to see it overused, but it's so unusual I really like it. At least until I read about grand-slam against the Rangers!

He used to live across the street from my parents, maybe early 90's. I can remember meeting him and telling him I remember him from the White Sox. And he said, and Brewers too, and later, I had to go look at cards, because like you Krypton, I didn't associate the 2, lol.