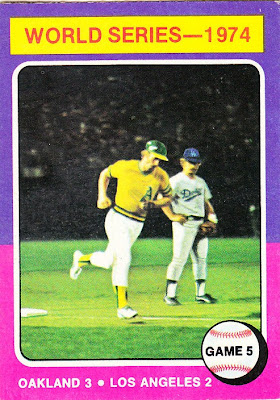 Card fact: This was an Awesomest Night Card Tournament quarterfinalist on the other blog. The card is sitting in the center pocket of the first page of my night card binder.

What I thought about this card then: I had the mini card, but I don't recall thinking much about it. Ignorance is bliss.

What I think about this card now: I've mentioned before that it's the saddest night card ever. My favorite player, Ron Cey, is watching Joe Rudi trot around third base on his way home with the eventual winning run. Rudi hit a seventh inning home run that broke a 2-2 tie in Game 5.

Other stuff: In the fourth 3-2 game of the Series, the pivotal moment came as the seventh inning began. Some nasty behaving Oakland fans were throwing debris at the Dodger left fielder, Bill Buckner, causing a five-minute delay. While this was going on, the new Dodgers pitcher, Mike Marshall, neglected to warm-up for some unknown reason.

Rudi, the first hitter in the inning, noted this and figured the first pitch from an un-warmed-up pitcher would be a fastball. He guessed right, and deposited that first pitch into the left field bleachers for the game-winning home run.

Buckner made things worse in the eighth inning when he led off with a single that got past outfielder Bill North. Buckner, who could run back then, tore around second and on his way to third. But Reggie Jackson gathered in the ball, fired to Dick Green, whose accurate toss to Sal Bando gunned down Buckner. The Dodgers didn't have anything left after that. 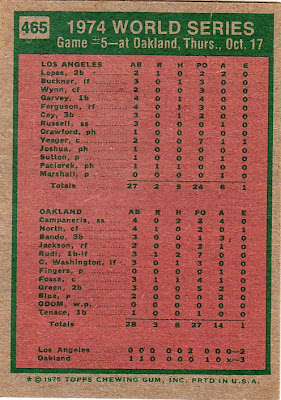 Back facts: Steve Garvey had another hit in this game. He had eight total in the Series and hit .381, by far the best in the Dodgers' lineup.

Other blog stuff: On this date in 1975, the U.S. Attorney General confirms that the FBI kept secret files on the personal lives of presidents, congressmen and others, on the orders of J. Edgar Hoover, who had died four years earlier.
Posted by night owl at 3:08 AM

You can see the dejection in Cey's body language. Sad.

Whatever happened to those files??

I was ten when the A's won this series. It was a great time to be a kid in the Bay Area. Yeah, why didn't Marshall warm up?

I still remember Von Joshua tapping out to Fingers, who celebrated early, jumping up and down as he skipped toward first base before throwing the ball. He almost threw it too late to get Joshua out. I remember this being an "easy" series because the A's won in only five, instead of seven in both '72 and '73.