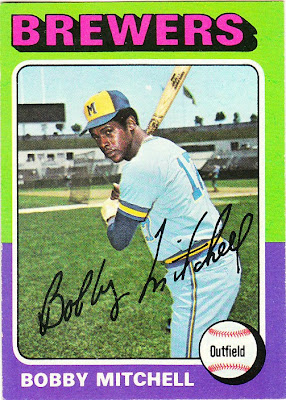 Card fact: This is just one of four Topps cards of Bobby Mitchell.

What I thought about this card then: I didn't see it. The Bobby Mitchell I knew was a Dodgers prospect in the early 1980s who ended up playing mostly with the Twins. But that Mitchell was white and this Mitchell ain't.

What I think about this card now: Not a lot. It kind of reminds me of the Bobby Darwin card from this set.

Other stuff: Mitchell was a backup outfielder for the Yankees and Brewers in the early 1970s. He started out with the Red Sox before being picked up by the Yankees in the Rule V draft. He was then dealt to Milwaukee in 1971.

Mitchell never played in more than 93 games in a season. After the 1975 season, he left to play professionally in Japan. He played for the Nippon Ham Fighters between 1976-79. 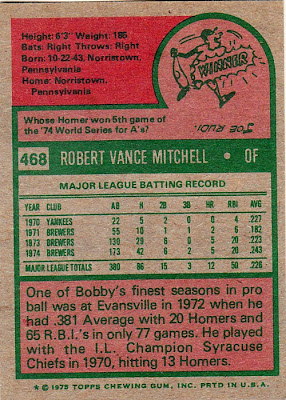 Back facts: What is going on with the cartoons????? We know the A's won the '74 World Series! We just went through the postseason subset!!! Enough!!

Other blog stuff: On this date in 1984, the movie "Spinal Tap" was released. "Dozens of people spontaneously combust each year. It's just not widely reported."
Posted by night owl at 3:00 AM