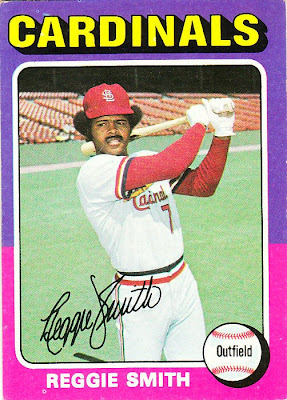 Card fact: This is the first card of Reggie Smith in an actual Cardinals uniform. He's airbrushed into a St. Louis uniform and cap in the 1974 Topps set.

What I thought about this card then: It took me a long time to see this card. I didn't come across it until I was trying to complete the set six or seven years ago.

What I think about this card now: It's unbelievably terrific. I feel like I should make a list about all of the things that I love about this card. But I'll restrain myself.

Other stuff: Reggie Smith was one of my favorite players of the 1970s. That makes two straight cards of two of my absolute favorites. As I documented on this post, the first Smith card I saw was his 1976 Topps card, and from that point, I thought he was badass, and I wanted him to play for the Dodgers.

He did end up playing for the Dodgers -- he was acquired in a trade with St. Louis for Joe Ferguson -- and competed in three World Series with L.A. He finished fourth in the MVP voting in both 1977 and 1978, the Dodgers' back-to-back World Series seasons.

Smith began his career with the Red Sox, and finished runner-up in the Rookie of the Year voting during Boston's "Impossible Dream" season in 1967. He ended his career with one season with the Giants in 1982. He later played in Japan. He now runs a bunch of baseball camps under the name "Reggie Smith Baseball Centers." 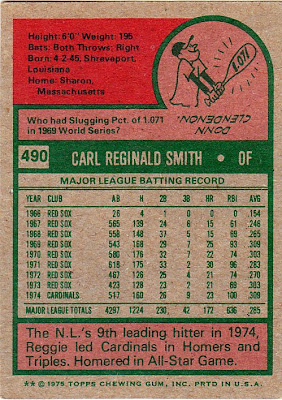 Other blog stuff: With this card, the purple-pink border combo crosses the 40 mark. Orange-brown is the only other color combo to do that so far. Soon, I'll be doing an inventory on how all the border combinations rank.
Posted by night owl at 2:00 AM

I think it's because Clendenon only played 4 of the 5 games, since he platooned with Ed Kranepool. He didn't play at all in the NLCS, but since Baltimore started Cuellar and McNally twice, he played in 4 games.

That's all I got.

That is a great card, but I'd love to know what Smith is looking at.