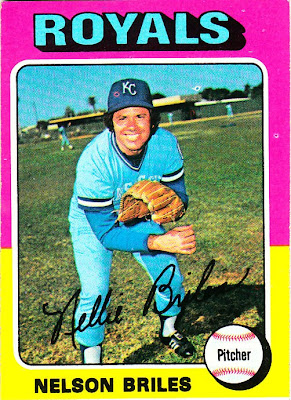 Card fact: This is Nelson Briles' only card in a Royals uniform. That '74 Topps Traded airbrush atrocity doesn't count.

What I think about this card now: I love how the Royals in the background, who may or may not be playing catch, frame Briles. It's a nice photo.

Other stuff: Briles was a control-type pitcher for the Cardinals, Pirates, Royals, Rangers and Orioles. He pitched in some big games and did well in them. With St. Louis as a youngster in 1967, he threw a complete-game victory in Game 3 of the World Series against Boston. With the Pirates in 1971, he threw a two-hit shutout against the Orioles in Game 5 of the World Series.

Briles won 19 games for the Cardinals in 1968 but his performance fell off and he was shipped to the Pirates. After a couple of 14-win seasons, Pittsburgh sent him to Kansas City. After a couple years there, Briles finished out his career with the Rangers and Orioles.

Briles was known for his singing ability. He performed a night club act for a little while and sang the National Anthem during the 1973 World Series.

Briles also worked as a broadcaster and front office man for the Pirates and Mariners. He died in 2005 of a heart attack at age 61. 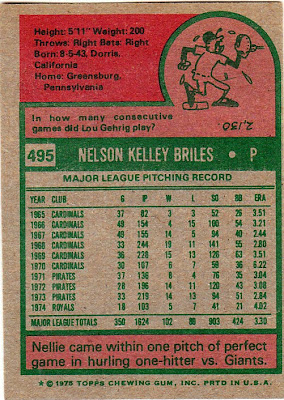 Back facts: Well, I like that highlight in the write-up!

Other blog stuff: Remember the last card and all the discussion of game-show host Peter Marshall? Well, today is Marshall's 85th birthday.
Posted by night owl at 2:32 AM

Briles' posture in this picture is kind of his classic pose that no else had. If blanked out his face and uniform from this card and his 70 and 72 cards, I still think I could recognize him.

Wow, one pitch away from a perfect game. Heart breaker.