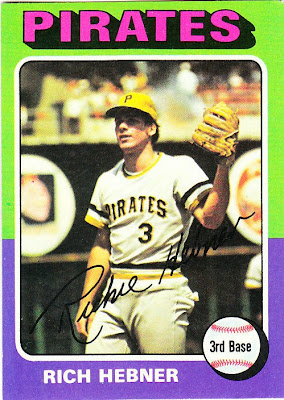 Card fact: Topps insisted on calling Hebner "Rich" throughout his career, even though I always knew him as "Richie," and Hebner referred to himself as "Richie," judging by the signature.

What I thought about this card then: Like the Doyle Alexander card, this is an action card from the set that I did not see as a kid. Since the Hebner card follows the Alexander card in sequence, and they both have green-purple borders, I always associate the two cards with each other.

What I think about this card now: I like the outfield wall logos framing Hebner. The one on the left is the Braves logo and the one on the right, I believe, is the Astros logo.

Other stuff: Hebner was a top prospect with the Pirates in the late 1960s. He hit well for Pittsburgh as the team's starting third baseman for eight years and participated in 21 postseason games for the Pirates.

He signed with Philadelphia as a free agent in 1976 and moved his position to first base because the Phillies had Mike Schmidt. He remained fairly productive but had little speed and his performance started to fall off. He was traded to the Mets, then to the Tigers, then reacquired by the Pirates.

Hebner finished up with the Cubs in 1984 and 1985. He later worked as a hitting coach and minor league manager for several teams. His most recent stint was in 2009 with the Frederick Keys in the Baltimore organization.

Hebner is most famous for working as a grave-digger during the offseason, back when players had to hold down second jobs. 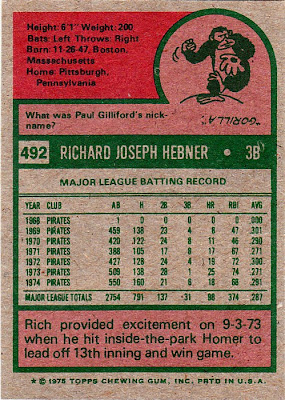 Back facts: I love animal cartoons, but it's almost impossible that anyone who read this cartoon knew who Paul Gilliford was. His entire major league career consisted of two games and three innings pitched with the Orioles in 1967. His ERA was 12.00.

Other blog stuff: On this date in 1987, the Mets acquire David Cone from the Royals for Ed Hearn and two pitching prospects that went nowhere.
Posted by night owl at 2:06 AM

I miss the outfield wall logos. Word verification: cation. Great one for me -- I'm a chemistry teacher! :)

I only knew him as Rich...thanks to Topps. I guess a lead off, extra inning, inside the park homerun would be exciting.