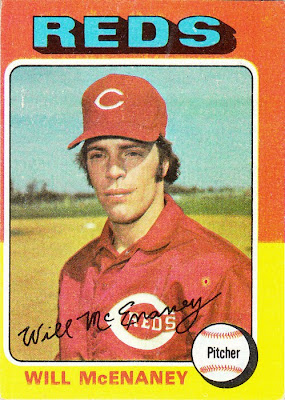 Card fact: This is Will McEnaney's first solo Topps card.

What I thought about this card then: The card I had was just as miscut as this one. But I don't recall having a problem with it. Off-center cards were much more common back then, and we barely batted an eye.

What I think about this card now: It's off-center! I need a replacement!

Other stuff: McEnaney is known mostly for getting the final out in both of the Reds' World Series-clinching wins in 1975 and 1976. He also appeared on a pretty famous Sports Illustrated cover at the tender young age of 23.

McEnaney pitched in 124 games in his career, all in relief. After three years with the Reds, he bounced around with the Expos, Pirates and Cardinals, and his career was over before the '80s began.

McEnaney ran a business for several years and most recently was featured in a newspaper article because he was the scoreboard operator for a Class A team for the Florida Marlins. 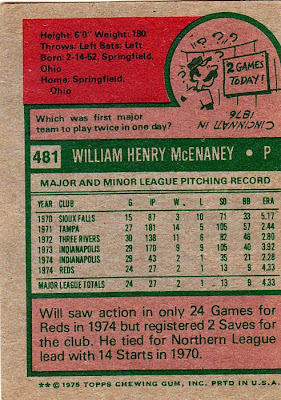 Back facts: I always thought players were fortunate when they received a cartoon about their team on the back of their card.

Other blog stuff: Here is the McEnaney card I pulled out of a pack in 1975: 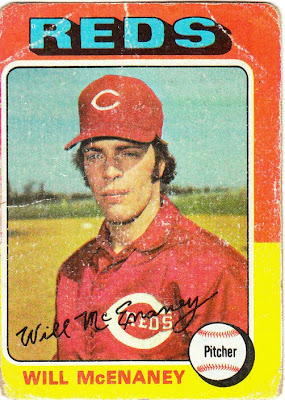 Maybe all of the '75 McEnaneys are off-center.
Posted by night owl at 1:41 AM

Is it just me or does that card, both versions, look really hazy?

That's a great SI cover too. It's a great example of the pure joy baseball can bring to someone.