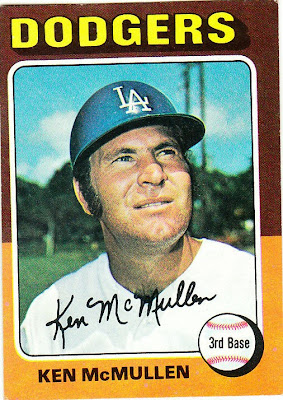 Card fact: You don't see too many close-ups of players wearing batting helmets from this time period. Usually, if they are wearing a helmet, they're involved in some sort of game action.

What I thought about this card then: I had the mini card. I thought the helmet was cool.

What I think about this card now: It doesn't really pertain to this card, but Ken McMullen may hold a Dodger card record. He played for L.A. on two different occasions. His first card for the Dodgers was in the 1964 set. He didn't have another card with the Dodgers until the 1973 set (and he's actually in an Angels uniform on that card). That's a gap of eight years between Dodger cards. I don't know if that's the longest gap for a Dodger player, but I can't think of anyone else right now.

Other stuff: McMullen came up with the Dodgers, but was traded a couple years into his major league career in the deal that also sent Frank Howard, Phil Ortega, Pete Richert and Dick Nen to the Senators in exchange for Claude Osteen and John Kennedy. McMullen became a consistent starter at third base for the Senators from 1965-69.

He was then traded to the Angels and started a couple of years for California. By the time he was shipped back to the Dodgers (in the deal that also brought Andy Messersmith to L.A.), he was a supporting player. The Dodgers had rising star Ron Cey at third base by 1973, so McMullen was a back-up.

In an extraordinarily sad development, McMullen played for the Dodgers in 1974 while his wife was losing a battle with cancer. She had been diagnosed with cancer while she was pregnant, but refused treatment until after the baby was born. She died in '74.

McMullen later played with Oakland and Milwaukee, ending his career in 1977. After his playing career, he created an annual youth fund-raising golf tournament and served as a community liaison with the Dodgers. 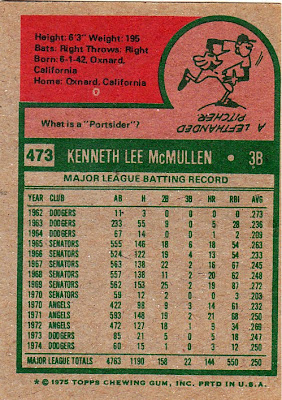 Back facts: I love these old-fashioned baseball terms. I probably last heard someone call a left-hander a "portsider" when Joe Garagiola was calling games on television.

Other blog stuff: Two players in this set are celebrating birthdays today. Jim Rice is 58. Dick Allen is 69.
Posted by night owl at 2:32 AM

I'm sure it's just an oversight but Ken's first card for the Dodgers was in the 1963 set with Charlie Hustle.

There's probably someone with a longer spread between Dodger trading card appearances but Rudy Seanez had a 1995 Topps Traded Dodgers card and then thirteen years later had a 2008 Upper Deck Dodgers card.

Oh, right. I forget about those four-player rookie cards. Even the Rose rookie.

What a terrible decision to have to make...foregoing treatment for the sake of the baby. I think every parent would do it, but it's sad that she had to make that decision. I always wanted one of those McMullen rookie cards (ok, it was for Rose really). Now, not so much.

The 1971 Ken McMullen is one of the cooles cards ever. Love the Monuments in the background.