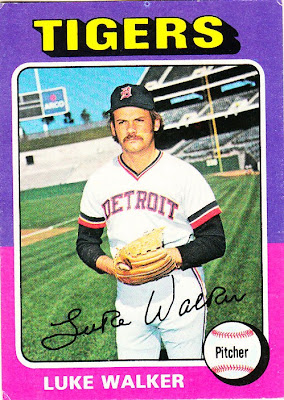 Card fact: This is the final card issued of Luke Walker during his career. It's also his only card -- he had eight Topps cards -- in which he's wearing a mustache.

What I thought about this card then: I never saw it. In fact, until very recently, I had no idea who Walker was.

What I think about this card now: Ah, the slanted field in Oakland has returned.

Other stuff: Walker was a starter and a reliever, mostly for the Pirates, from 1965-1974. His major league career was over by the time this set hit stores.

Walker went 15-6 with a 3.04 ERA for the Pirates in 1970, finishing 10th in the N.L. Cy Young Award voting. His performance declined after the 1971 season. After two more years with the Pirates, he was purchased by the Tigers in December 1973. He pitched mostly in relief during his final season with Detroit in 1974. 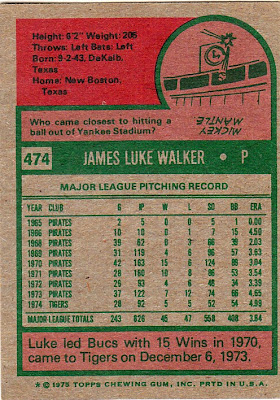 Back facts: Walker might have been more popular in the early '70s if he went by his first name. Another Jimmie Walker was making a name for himself starring in "Good Times," which debuted successfully in 1974.

Other blog stuff: The purple-pink border combo moves into sole possession of second place with this card. It is just four cards behind the orange-brown border combination.
Posted by night owl at 12:35 AM

He just missed out on going by the nickname, Luke (Sky) Walker. That card should have come with a hand rail to keep you from falling due to extreme field tilt.

That sloping field in Oakland. It was 1960's rain drainage technology.

Luke didn't lose the 1971 World Series Game 4 (his only start). He had nothing and was knocked out in the 1st inning and relieved by Bruce Kison, who went on to hurl 6.1 innings (IIRC) of one-hit, three-HBP ball.

I remember it well. I was there!