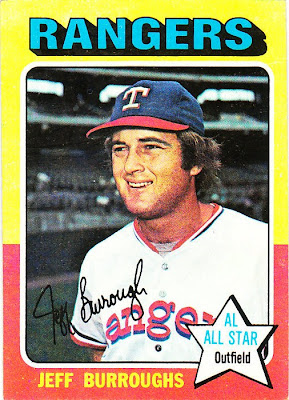 Card fact: This card recognizes the first time a Texas Ranger started in the All-Star Game. Burroughs was selected to start in 1974 and played left field for the American League.

What I thought about this card then: My brother had the mini card, and I'm quite sure it was the whole reason why he liked the Rangers so much in his early days of collecting. We both treated this card as something precious, and I'm sure I was jealous that my younger brother had such a cool card.

What I think about this card now: Burroughs is not wearing glasses on this card or in his 1976 Topps card. But he is wearing them on the 1974 Topps card that is also featured in the 1975 Topps MVPs subset.

Other stuff: Burroughs was a No. 1 overall pick of the Washington Senators in 1969. He was always considered a strong hitter, and he showed it when he became the first Ranger to win the MVP award in 1974. After that seasons, Burroughs' average plummeted and he was dealt to the Braves in 1976 for five players that didn't amount to much for Texas.

With the Braves, Burroughs slammed his way through two good seasons (he hit 41 home runs the same year George Foster hit 52) before running out of steam. His at-bats decreased, he was dealt to Seattle, and he operated as a part-time player with the Mariners, A's and Blue Jays.

Burroughs later became known as the Little League coach for his son, Sean Burroughs, who as a former top prospect had a mediocre major league career, mostly with the Padres. Sean reappeared with the Diamondbacks in the 2011 season. 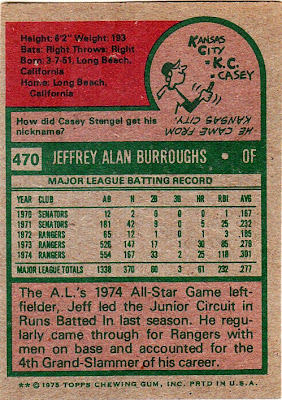 Back facts: I missed posting on Burroughs' birthday by three lousy days.

Other blog stuff: Let's add Burroughs into the American League lineup for the 1974 All-Star Game:

It took them 22 years and tons of PEDs.