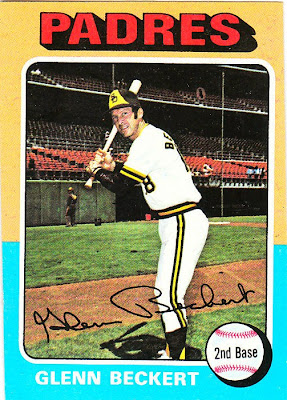 Card fact: This is the final Topps card of Glenn Beckert issued during his career.

What I thought about this card then: This is another card that I remember pulling during a family vacation in Western New York. I remember being struck by how tiny Beckert was (although it was only because the photographer took the shot from so far away) and also by how tiny Beckert's bat was.

What I think about this card now: I like the shadow underneath Beckert's signature. It's cool.

Other stuff: Beckert started out with the Red Sox, but came up to the majors with the Cubs. He teamed with Don Kessinger to form the Cubs' middle infield combination during the 1960s and early '70s (I still confuse the two).

Beckert was a four-time all-star, a good fielder, and seldom struck out. He finished third in the National League in batting average in 1971, and really piled up the hits during his career. If it had lasted more than 10 years, he could've been among the all-time hits leaders at the rate he was going.

After that '71 season, his output declined and he was traded to the Padres in 1973. Beckert was merely a backup for San Diego, and he retired in 1975. After his career, he worked as a commodities trader. 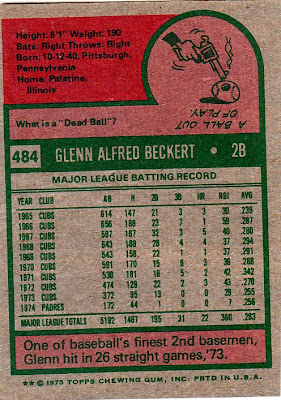 Back facts: My, what a violent cartoon.

Other blog stuff: On this date in 1975, the movie "Tommy" debuted. This is another one of those movies from that time that weirded me out when I was a kid.
Posted by night owl at 1:31 AM

Beckert was Ron Santo's roommate on the road. He tells this story:

"I saw him give himself an injection and he was hitting 335 or 336. I was hitting 210, and that was my first year and so I says, 'I'm not going to be here too long. Ron, I don't know what you're taking, but I need one of those!' And he laughed, then sat down and told me about the diabetes."

the Tommy movie still weirds me out.

I think the reason the shadow is falling that way is because the sun is almost directly overhead. It's the angle that causes the bat too look that way in the shadow.