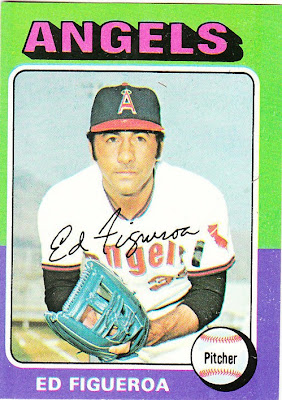 What I thought about this card then: I had the mini card. I apparently didn't like it very much because there are creases all over it. I wish I had scanned it to show its miserable condition.

What I think about this card now: Digging the blue glove. The man should be a Dodger.

Other stuff: First things first. Ed Figueroa was the home starting pitcher in the first major league game I ever saw in person. He pitched for the Yankees at the time, and most importantly, he lost.

Figueroa was acquired by the Yankees from the Angels in the trade that sent Bobby Bonds to the Angels (the Yankees also acquired Mickey Rivers). Figueroa had just had his breakout season in the majors, going 16-13 for last-place California in 1975.

While with the Yankees, he won 20 games in 1976, becoming the first Puerto Rican pitcher to win 20 games in the major leagues. Figueroa continued to be a top-line starter for the Yankees during their years of three straight World Series appearances from 1976-78. His postseason record, however, was miserable. He was 0-4 in seven starts with a 7.47 ERA.

Figueroa ran into arm problems in 1979 and pitched in just 16 games. He was purchased by the Rangers in mid-season 1980, but struggled mightily in Texas. He ended his career rejoining Billy Martin in Oakland, in 1981.

Figueroa, who was first signed by the Mets, and served in the Vietnam War, is the uncle of Astros pitcher Nelson Figueroa. After retirement, Ed started a restaurant in his native Puerto Rico, which he still runs. 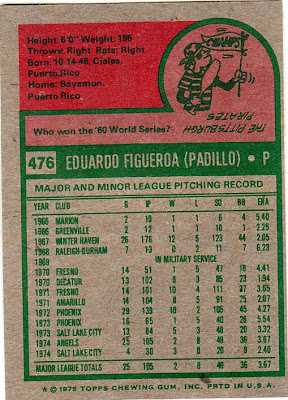 Back facts: Figueroa was a busy guy before reaching the major leagues. He was 28 by the time he broke through as a starter/reliever with the Angels in 1974.

Leave it to the Rangers to bring in a guy with arm troubles. How could you not be hooked on baseball when the first game you saw was a Yankees loss?

Not that I am big believer in pitch counts, but Billy Martin did have a reputation of wearing out pitchers. Looking at his stats, he did pitch 4 straight years of 240 to 260 innings, after only topping 200 innings once during his minor league career.

Ah, but I have fond memories of Figueroa. He pitched for the Yankees back in the glory days when I first started following them.

I like the 1980 Figueroa. You didn't see too many Yankess cards in the road uniform back then (or now for that matter). The 1980 Figueroa and the 1975 Bill Sudakis are two of my favorites.