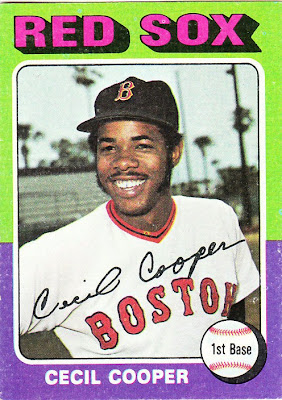 Card fact: There is not a happier card in the set. Really. I checked.

What I thought about this card then: Oh my goodness, it might have been my favorite card in the whole set at one point. I absolutely loved it. Cecil Cooper was at the start of his career at this point, but I thought he was going to be a superstar. I had nothing to base this on except hope and a smile. It turned out, I was pretty on target. Maybe he wasn't a superstar, but he had a great career.

What I think about this card now: Love the palm trees.

Other stuff: Cooper was a sweet-swinging first baseman who started out with the Red Sox but made his biggest impact with the Brewers. He was dealt to Milwaukee, along with Bernie Carbo, in the deal that returned George Scott to the Red Sox.

In 1980, Cooper hit .352 and finished second in the A.L. in batting average because George Brett hit .390 (I was rooting for Cooper the whole way). Cooper was an RBI machine for Milwaukee, driving in more than 120 runs three separate times. He also finished his career with 415 doubles and finished in the top 10 in the MVP race four times.

After his playing career, he coached in the Brewers' organization. In 2007, he replaced Phil Garner as interim manager for the Astros and managed the team for a couple of years. 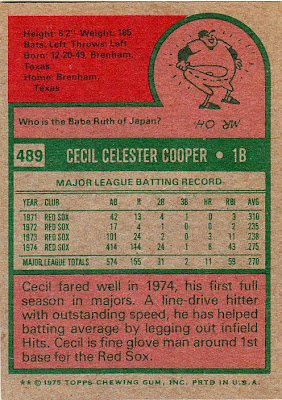 Back facts: Goodness, that might be the most offensive cartoon in the whole set. And why couldn't they write "Sadaharu" Oh?

Other blog stuff: I was surprised to see that I had not scanned the original Cooper card that I pulled out of a pack in '75. I just checked and apparently I don't have that card anymore. I have no idea where it went as I'd never trade it.
Posted by night owl at 12:43 AM

I'll always remember Coop as a Brewer. He was a beast. A happy beast apparently. He's another one of those guys with a great signature that young players should be forced to study.

Coop was one of my faves as a youth.

"Mr." Oh ... a total lack of context ... a shiny fat guy ... What a bizarre combination of things. I don't remember that comic as a kid, but would have blown my 9-year-old mind. It still comes close today.