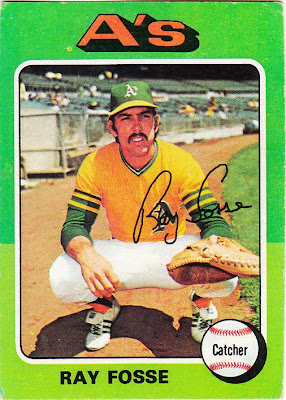 Card fact: Well, it's not much of a fact, but I challenge you to find two back-to-back cards that feature more memorable mustaches than this one and the previous card.

What I thought about this card then: My brother had this card, and we thought it was amazing. Snidely Whiplash had his own card!

What I think about this card now: It's even more amazing. The A's green-and-gold uniforms were lost on us kids because everyone wore wacky uniforms in the '70s. But 35 years have passed and I now realize how fortunate we were to see ballplayers running around in those things.

Other stuff: Ray Fosse is most known for getting bowled over by Pete Rose on the final play of the 1970 All-Star Game. The play is blamed for ruining Fosse's career, but the fact is there was plenty of blame to go around throughout his career.

Fosse was injury prone and always seemed to find his way off the field. He was leveled by Jim Rice in another home plate collision late in his career. In 1974, he suffered a back injury trying to break up a fight between teammates Reggie Jackson and Bill North. But in between all the injuries he was known as a tremendous handler of pitchers. Before his '74 injury, he was the A's top catcher, helping pitchers like Vida Blue, Ken Holtzman and Catfish Hunter lead Oakland to a dynasty.

Fosse came to the A's in a trade with Cleveland that sent George Hendrick to the Indians. Fosse later returned to Cleveland, and also played for Milwaukee and Seattle before ending his career in 1979. After his playing days, he became a broadcast announcer for the A's, and still announces Oakland games. 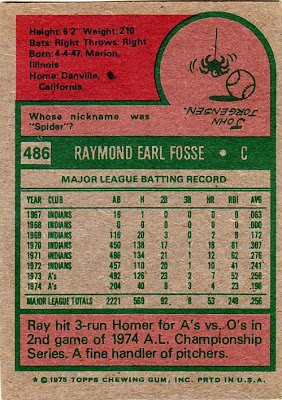 Back facts: Spider Jorgensen was the Brooklyn Dodgers' starting third baseman during his rookie year in 1947. The Dodgers won the pennant that year. But Jorgensen would never come close to playing that well again and was out of the majors by 1952.

Other blog stuff: On this date in 1968, Kansas City's new baseball franchise was named. The Royals were born. They're going to be good again. You just wait.
Posted by night owl at 2:24 AM

Man, if they'd just had him throw on the tools of ignorance, the card would be perfect. As it is, it's pretty nice. And now...I'm caught up again.