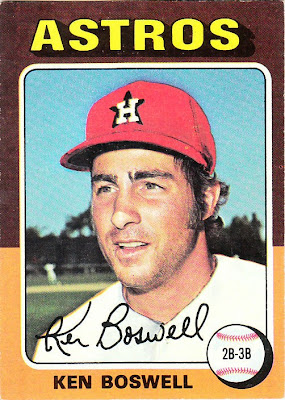 Card fact: Ken Boswell is wearing an airbrushed Houston Astros cap. He was traded from the Mets on Oct. 29, 1974.

What I thought about this card then: I was oblivious to the airbrushing job. Also, I can't recall where I obtained this card in 1975, but I did own it. I must be getting old.

What I think about this card now: Not good. One of the least interesting cards in the set. If I can't even remember how I obtained it in '75 -- a year in which I was goofy over every card I got -- then you know it isn't that riveting.

Other stuff: Boswell played second base for the 1969 Miracle Mets, a fact that I didn't know until long after Boswell retired. I associated him completely with the Astros, even though that was at the tail end of his career. He came up with the Mets in 1967 and was playing regularly with them by '69. Boswell was a solid fielder, and in the 1969 NLCS, hit two home runs against the Braves.

Boswell continued to be the chief starter for the Mets through the 1972 season, but his offense tailed off in '73 and Felix Millan took over. Boswell was dealt to Houston for outfielder Bob Gallagher after hitting just .216 in 1974.

He was a backup with the Astros. His career ended after the 1977 season. 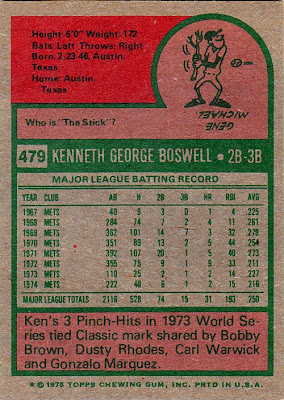 Back facts: Boswell's three pinch-hits in the 1973 World Series came in three at-bats. But I couldn't figure out whether he still holds the record.

Other blog stuff: Here is the original Boswell card that I pulled in 1975: 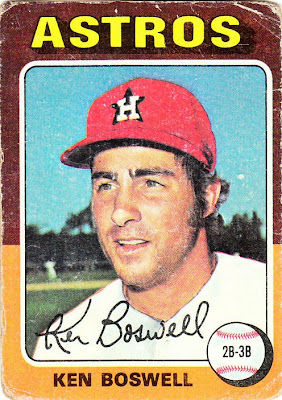 Another weird shot. I just got through saying the Astros played in a desert landscape and yet, in this photo that appears wrong. Was I thinking of a different team? That wonky eyebrow has me a bit worried. It looks like it's starting to revolt.

According to baseballalmanac.com, the record for World Series pinch-hits is still 3, held by...Johnny Blanchard, Ken Boswell, Bobby Brown, Bob Cerv, Carl Furillo, Gonazalo Marquez, Johnny Mize, Ken O'Dea, Dusty Rhodes, and Carl Warwick. It's interesting that Topps chose not to mention guys like Mize and Furillo on the back of the card.