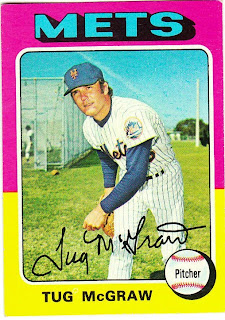 Card fact: Out of six cards so far that have shown a pitcher faking a throw, this is the first one doing it left-handed. Tug always had to be different, didn't he?

What I thought about this card then: It wasn't a thought in my head.

What I think about this card now: I just get sad when I see cards of McGraw now because he died at an early age.

Other stuff: I will always think of McGraw as a Phillie. I know he has a proud history with the Mets. "Ya Gotta Believe," and all that. But that was all before my time. The first card of McGraw's I ever saw was his 1976 Topps card, and he was a Phillie. 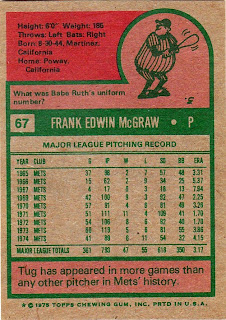 Back facts: I never knew McGraw's real first name was Frank until right now. Also, look at how fat the cartoonist thought Babe Ruth was. Hitting 714 home runs in that kind of shape really would have been something.

Other blog stuff: The blog will be taking a brief break for the Christmas holiday. I wish I could remember what I received for Christmas gifts in 1975. Someday I'll have to check my mother's photo album to find out. Yes, I said photo album. I'm that old.

Merry Christmas!
Posted by night owl at 2:48 AM

Merry Christmas to you!

And I still think it looks strange to see the Tugger in a Mets uniform.

He looks pretty young in that shot. I just remember him from the 1980 Series.

Back in the 70's Tug had his own line of books called 'scroogie'. Little funny cartoons on each page. I had a couple, they were awesome.