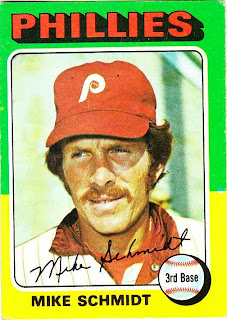 Card fact: This is the first time Topps gave Mike Schmidt a card number ending in zero. For the rest of his career, Topps put a zero at the end of Schmidt's card number. Don't believe me? Look it up. I did.

What I thought about this card then: I didn't see it. My first Schmidt card was the 1976 Topps card, which is a great one.

What I think about this card now: This was one of the last cards I acquired when I was collecting the entire set about five years ago. The price kept getting in the way.

Other stuff: Were there people who didn't like Schmidt? He seemed to be much-appreciated among a variety of baseball fans. Even I liked him and Schmidt kept bumping my favorite player, Ron Cey, out of a starting All-Star spot. 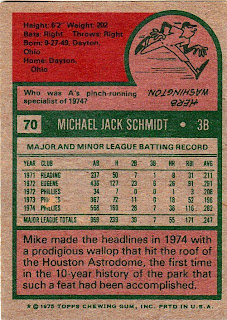 Back facts: That's a frightning cartoon likeness of Herb Washington. He looks like Michael Jackson in Thriller. ... 1974 was Schmidt's breakout year. You can see he had a miserable time in 1973. ... "Michael Jack" is a tremendous combination of names.

Other blog stuff: I took a bit of a break there. I needed it. But I'm back. I've slowly started back with the scanning, too. Up to 572 cards scanned.
Posted by night owl at 2:16 AM

I don't think I knew that about the roof of the Astrodome.
I always liked Mike.