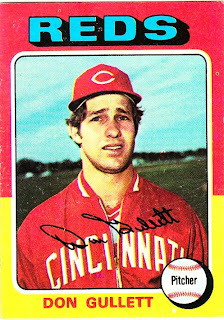 There are some players with cards ending in "5" that really don't deserve the honor. One is coming up at #85. That's the same card that breaks up the team pattern. Who is that dastardly player? You'll have to wait.

What I thought about this card then: Didn't see it. But I was a closet Don Gullett fan when I was a kid. He was a lefty pitcher, who could throw hard, which was a good thing. But he pitched for the Big Red Machine and the late '70s Yankees, which was a bad thing.

What I think about this card now: Gullett almost always looked on the verge of tears on his cards. This is not as pronounced as some other photos, but a good example.

Other stuff: Gullett had an abbreviated career, thanks to arm trouble. But he enjoyed a second career as a pitching coach and ended up being inducted into the Reds' Hall of Fame. 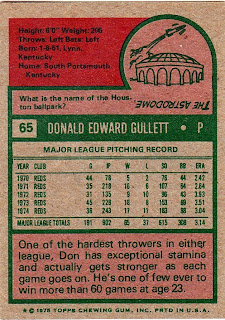 Back facts: There are people who dispute the belief that a pitcher can get stronger as the game progresses. They used to say that about Fernando Valenzuela all the time. It does seem physically impossible. I think saying, "Gullett doesn't get as tired as other pitchers during the course of a game," might be more accurate.

Gullett was right in the middle of the peak of his career at this point. He'd have another great season in 1975.

This has to be THE WORST portrait I've ever seen on a baseball card. You should hold a contest for people to give it a caption. That could be pretty funny.

"Oh no, I'm not getting airbrushed am I?"

"Please don't trade me to Cleveland Sparky, I'll do anything!"

Knowing Steve Garvey is 61 makes me feel old. I wonder if Gullett had that same look in family photos. The color combo is better than most as far as matching the players uniform.