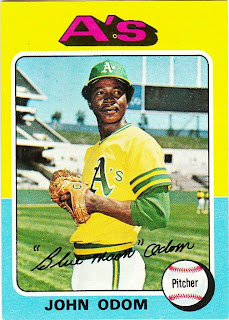 Card fact: The first card of a player whose signature does not include his actual first name.

What I thought about this card then: Another one of my favorites. The combination of the bright border with the A's bright uniforms made this an easy one to like. I'm not sure what happened to the original card I had.

What I think about this card now: It remains a great card. I like Odom's knowing smile.

Other stuff: Odom's nickname came from childhood when a friend thought his round face looked like the moon. He enjoyed a long career with the Swingin' A's, and true to the A's reputation, he was involved in a fight with teammate Rollie Fingers just prior to the 1974 World Series with the Dodgers.

After his career, Odom endured drug and alcohol problems, but has remained clean since the mid-1980s. He's an avid golfer. 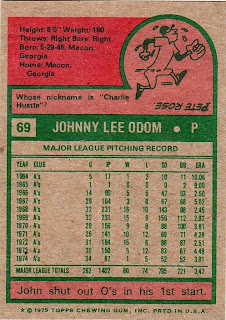 Other blog stuff: I'll go with a birthday today. On this date in 1975, former Brewers pitcher Jeff D'Amico was born.
Posted by night owl at 2:20 PM

Those STINKIN' liars...how did you know about his first start?

Sure, go and make work out of it. That will teach me to trust everything I read on the back of cards. Now I'll be questioning whether the answers to their cartoonish questions are true or not.

Odom's last major-league win (though not his last start) was a no-hitter.