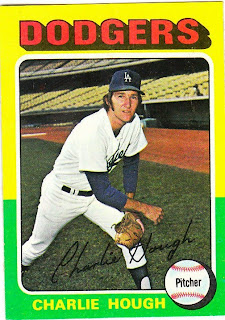 Card fact: Seventy-one cards into the set and we've already come across two players who were born in Honolulu, Hawaii. Milt Wilcox was the other one.

What I thought about this card then: I thought Hough had some long hair when I saw his card, but for some reason, he wasn't one of those dudes who looked like a lady to me. Don't know why. Hough must've given off a manly vibe.

What I think about this card now: Wow, Dodger Stadium is deserted. 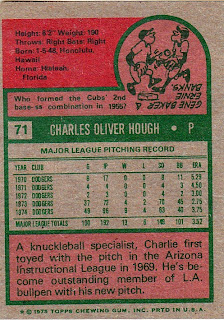 Back facts: I guess by 1975, Hough was considered a "knuckeball specialist." But back in 1969, Hough was almost out of baseball after hurting his arm. He tried to play first base, but couldn't do that either. So, he was taught the knuckleball. With the help of Hoyt Wilhelm and Jim Brewer, both pitchers on the Dodgers, he mastered the pitch and his career lasted until he was 46.

The cartoon trivia question is awfully random. Is there something special about the Cubs' double-play duo in 1955? Who is Gene Baker?

Oldie, but goodie: You better believe I still have the original Hough card that I pulled in 1975. This is it in all of its scuffed glory: 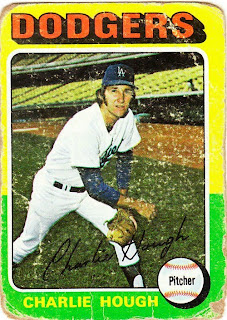 Other blog stuff: I'm going to stay on Mr. Hough. This card is the only card in the 1975 set that I have autographed.

It came from Wicked Ortega of My Pastime ... I Love It! What a great guy The Don is. And here's the card: 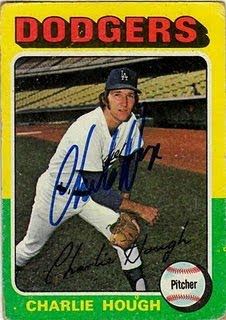 I actually prefer my 1975 cards unsoiled by scribblings. But like everything, I make an exception for Dodgers.
Posted by night owl at 1:05 AM

I'm no grammatical wizard, but the grammar mistake on the back of his card jumped out at me. You'll forgive me for being partial to the grizzled, knuckleballing starter for the Rangers era. Still, you have to love those early Hough cards.

Re: Gene Baker....he came up to the Cubs in 1953 at the same time as Ernie Banks. They were the Cubs first black players and I suppose the thought was if you brought in two blacks, they could room together.

Thanks, WW. I guess Topps didn't have enough room to mention why that trivia question was relevant.

Interesting about Banks & Baker. I think A LOT of the trivia on the '75 cards is pretty random.

Also, I totally agree with you on the unsoiled by scribblings comment. I also don't want any graded cards in my sets. (Unless they're ALL graded, and all graded the same. Who's got that kind of money?) I'm kind of Monk-ish about collecting.