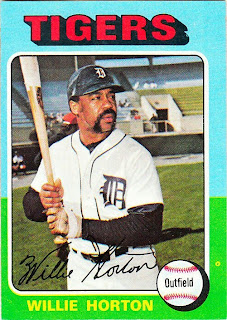 Card fact: The best handlebar mustache in the entire set. Yes, I've looked. There is only one other player that even comes close, and we won't see that card for a long time.

If I could, I would grow a mustache like that without hesitation. And by "if I could," I mean if I didn't mind eating my meals in the garage.

What I thought about this card then: Duh, I thought it was awesome. Yet, somehow it left my possession in a trade of some sort. Temporary insanity, I guess.

What I think about this card now: Players who wear batting helmets in their photos are cool. I don't know why. They just are.

Other stuff: Speaking of batting helmets, according to his wikipedia page, Horton kept the same helmet wherever he went. He just painted it a different color when he switched teams. Also, according to wiki, he is the youngest of 21(!) children.

Horton is much revered in Detroit. The Tigers retired his number and there's a statue of him in front of their park. 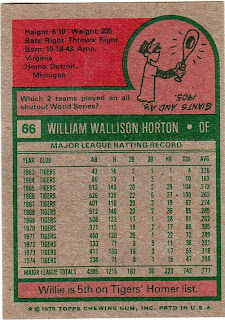 Back facts: I've mentioned this before, but "William Wallison Horton" is one of the best baseball names ever.

Other blog stuff: I've scanned in 567 cards of the set and that might be it for a few days. Even scanning takes a break for the holidays.
Posted by night owl at 2:53 AM

When you come from a family with 21 kids, you use stuff until it wears O.U.T. I think that is why he kept that helmet. It must have been rather "worn" if you know what I mean. At first I wondered what he might be looking at then it dawned on me...he must "hear a Who".

I think that Willie is really overrated here in Detroit...I mean, his #s are far from Norm Cash, yet who has a statue at Comerica Park? To be fair, at least they made it the 1975 era Willie Horton, with the huge fu manchu . . .

Also, I once literally ran into Willie at a card show at wonderland mall. 5'10 is a stretch, but the guy was two yards across the shoulders.