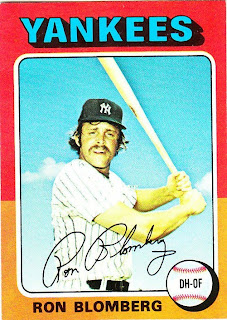 Card fact: This card is on the cover of Blomberg's book, "Designated Hebrew."

What I thought about this card then: Blomberg was a friend of mine's favorite player when I was a kid. His family was Jewish, and he was a Yankee fan, so we used to hear about how wonderful this guy was.

What I think about this card now: What an odd-looking photo. The image is shot from below, and with the clouds in the background, it's a typical hero shot. But the look on Blomberg's face is almost puzzlement. It's a strange combination.

Other stuff: I missed my chance, taking the day off for Christmas yesterday. I could have featured a Jewish player on a Christian holiday. 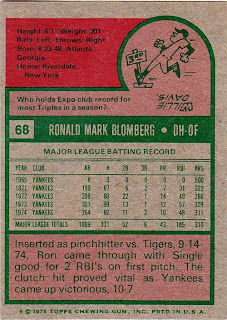 Back facts: Blomberg (pronounced "Bloomberg") was the first designated hitter in history, but there's no mention of that on the back of this card. On his 1974 card, which would have been the first card issued after his first appearance as a DH, it merely says, "Was Yankees' top DH last year."

Other blog stuff: I'll be calling this color combination the "Burger King" design after the fast-food chain's logo -- the old logo, not the current one.
Posted by night owl at 2:52 AM

Nice career average. That backdrop reminds me of some of the "retro" cards they're making now.