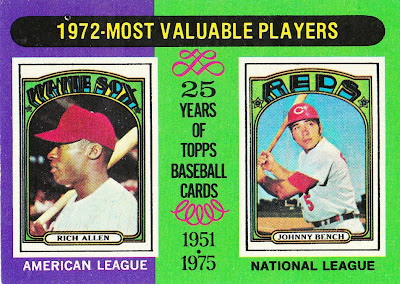 Card fact: This card shows Topps' 1972 design. The "psychedelic tombstone" set is about the only card set that can compete with the '75s in terms of colorfulness. It was also the first set that did not feature the player's position on the front of the card since the 1952 set. Those sets have always been a little frustrating for me.

What I think about this card now: Some real shadiness by Topps with the Rich Allen card (I never heard him called "Rich." It was either "Richie" or "Dick.") Allen was traded by the Dodgers to the White Sox in December of 1971, not enough time for Topps to get a photo of Allen in a White Sox uniform. So, Topps used the SAME photo of Allen that it used in the 1970 set, when Allen was traded from the Phillies to the Cardinals in October of 1969 and Topps didn't have time to get Allen in a Cardinals uniform.

So what collectors ended up with in the 1972 set is Allen in a Phillies uniform from, at the most recent, a game in 1969. Apparently, since the Phillies, Cardinals and White Sox all wore red at the time, Topps thought they could fool all the kiddies. Unfortunately for them, kiddies grow into cynical collectors.

Other stuff: If I was a Dodger fan in 1972, I probably wouldn't be pleased that the Dodgers traded away someone who would win the MVP the very next year. But at least they got a pitcher who was a valuable part of their rotation for a few years in Tommy John. 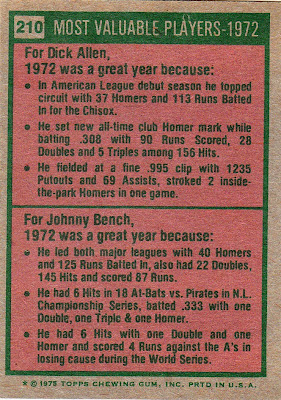 Back facts: Note that Allen is "Rich" on the front and "Dick" on the back.

Also, I should at least mention Johnny Bench once before the end of this post. This was Bench's second MVP in three seasons and Topps goes and mentions his team's loss to the A's in the '72 World Series.

Other blog stuff: "Star Wars" was released on this date in 1977. Unlike thousands, possibly millions, of other people, I have seen this movie only once. But I did see it in 1977.
Posted by night owl at 2:43 AM

Those shady *&^%*(. They do like to mention those playoff stats don't they.

I have seen Star Wars too many times...just like I've busted too many packs of 2010 Topps Series 1.

The Rich/Dick thing is funny. Somehow it seems pretty sloppy.

I thought the photo looked familiar when I saw it on his 1970 card.

Playoff/World Series stuff doesn't belong in an MVP write up for all the reasons you've mentioned before. But if Topps feels absolutely compelled to mention it, why couldn't it be "Bench's statistical awesomeness LED THE REDS to the World Series"? Or that, thanks to Bench, "...the Reds CAPTURED THE NL PENNANT". Why put a negative on a bullet list that's supposed to tell how great the player is.

(Bench was always my favorite growing up, so maybe I'm a little protective.)

Final note: I agree that cards need to have the position on the front. I could never include a position-less design in a list of great years for cards.

As for Dick Allen, his 1971 Topps cards is one of my favorite, the pose of him sitting there with the bat in his hands, was a unique shot from the late 1960s through the 1970s