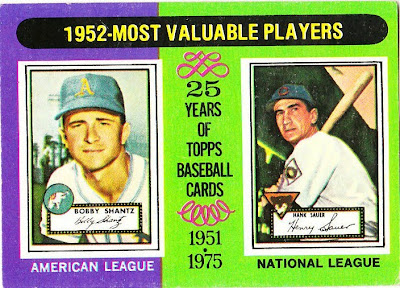 Card fact: Topps is displaying what has become known as the card set that started "card collecting" as we know it. The 1952 set was the largest set of its time (407 cards), and featured team logos on the front and statistics on the back, both of which were considered innovative at the time.

What I thought about this card then: I pulled it card fairly early in my first year of collecting. It's hard for me to remember which MVP cards were in those first packs that I ever bought, but I know this card arrived very early in the show.

What I think about this card now: These are two players who gave two suffering franchises some rare attention in the 1950s. Bobby Shantz played for a resurgent A's team that in 1952 enjoyed the last winning season they would ever produce for the city of Philadelphia. Hank Sauer played for the Cubs, who were terrible in the 1950s.

Other stuff: When I picture this card, I see the Shantz image. I have known of Bobby Shantz since I was 9 years old, which is interesting to me, because I'm fairly certain that he is one of the most unknown MVPs in history. Shantz went 24-7 in 1952, but didn't come close to anything like that again. He became a reliever and had some decent years for the Yankees. He was a repeated Gold Glove winner. 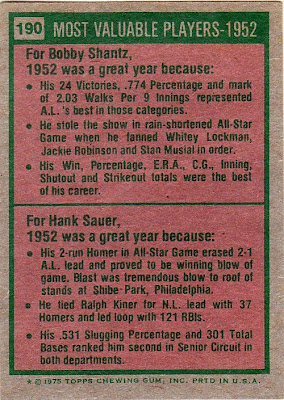 Card facts: Any National Leaguer who hits a home run that proves to be the winning blow in the All-Star Game is OK by me. Sauer hit more than 30 home runs six times in his career.

Other blog stuff: Here is the card that I pulled out of one of those packs in 1975: 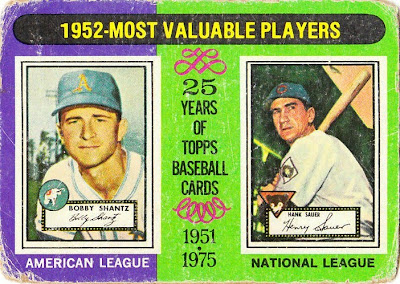 I was hell on the corners, but otherwise not too bad.

I like the original. That one has some character.

Bobby Shantz is still cooking around. His name pops up at local card shows and signings a few times a year.