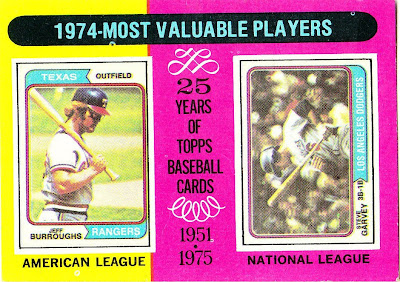 The Steve Garvey card, meanwhile, is truly great, another one that I held at a high level from a very early age.

Earlier, I mentioned that there would be one card in which one MVP was on a vertical card and another on a horizontal card. This is the card, obviously. Topps chose to tip the Garvey image on its side and make the '74 MVP card horizontal.

What I thought about this card then: I pretty much covered it up above. This is a card that I pulled from the first packs I ever bought. But for some reason I didn't scan that card in, so I can't show you the ragged mess that it is now.

What I think about this card now: The Burroughs card really isn't that special-looking. But when I was a kid I thought he was really doing something.

Other stuff: Burroughs and Garvey were both fairly young when they won this award. I'm assuming people thought this signaled the arrival of the new guard of players. Garvey did end up being one of the best for a number of years. Burroughs, though, leveled off, although his career lasted for a good while. 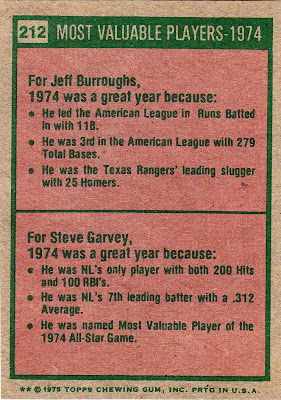 Back facts: What happened to all the wordiness? Did the writers get sick of tracking down stats and phone in the final card?

Other blog stuff: There won't be another subset until the league leaders subset in a little less than 100 cards. It's back to player cards tomorrow. We return with a card featured once before.
Posted by night owl at 2:21 AM

I like the Burroughs and the Garvey cards. Maybe the fact checker was tired by the time they got around to that card. I'm looking forward to the return of the player cards.

I was 8 years old when this Jeff Burroughs card came out, and living in Fort Worth, Texas, he was my IDOL along with the Reds from the Big Red Machine era. My father took me to my first Texas Rangers game in old Arlington Stadium, and I finally got to see Jeff Burroughs play. This card also brings back great memories for me. Thanks.

Good Pete, that Garvey card is without doubt one of the classic cards of all time. I'm not talking about money. Top ten.