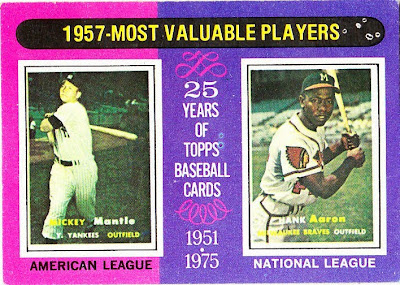 Card fact: This card is routinely priced higher than any other card in the MVP subset. You've got a Mantle. You've got an Aaron. People are going to want it.

What I thought about this card then: Wasn't aware of it.

What I think about this card now: The 1975 cards, I've noticed, sometimes feature some sort of printing flaw, in which there are dot-like splotches on the card. You can see them in white on the black bar on the top right part of the card, as well as in blue in the center of the card on the purple background.

I can deal with creases, worn corners, tears and pen marks. But for some reason printing flaws bother me. I have had virtually all of the cards that featured those dots replaced. But I have not replaced this one, mostly because it's a semi-costly card.

Other stuff: The card features the 1957 Topps set, which was the first Topps set to appear in the now-familiar 2 1/2-by-3 1/2 dimensions. Many collectors like the clean design of the 1957s. I always thought they were rather boring. Some of that is because the photography wasn't up to today's standards and a lot of the card photos came out dark and washed out. However, there are some very nice cards in the set, too, with some terrific background scenery of the era. I'm sure at the time it was very interesting -- after all of those painted sets -- to see an all photographed set. 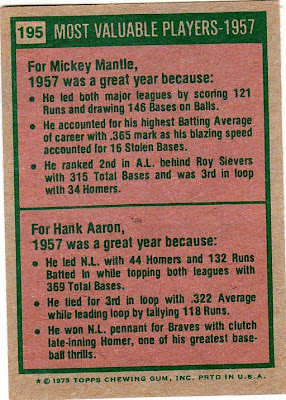 Back facts: Again, you can't argue with these two MVPs. Mantle had his second straight tremendous season. His 146-walk total ranks only 19th all-time, which surprised me a little bit. But then I looked at the all-time leaders and found out why I was surprised. Between 1956 and 1996 only one player had more walks in a season than Mantle, and that was Jimmy Wynn in 1969. But then Bonds and McGwire came along and completely shattered the walk records for almost the next decade.

Other blog stuff: On this date in 1975, "Monty Python and the Holy Grail" was released. It's just a flesh wound.
Posted by night owl at 12:59 AM

They should use "the loop" reference more.

Another thing about the 1957 set was the number of players who were pictured in their road jerseys. It makes for kind of a drab set. Bring on the color! :)

FYI In printing lingo, those dots,caused by an ink bubble, are called "assholes"

Note that the 1957 Aaron photo is inverted; he's batting left-handed and the 44 on his jersey front is backwards. Don't believe the card was ever corrected.