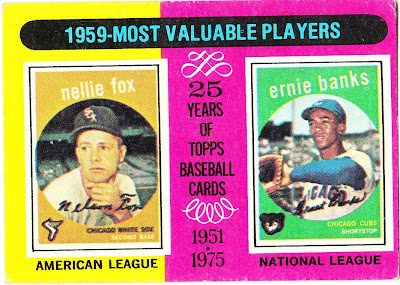 Card fact: This card featured the 1959 Topps design, probably my second favorite design from the 1950s. I'm sure the set looks great in a binder. Very colorful.

What I think about this card now: That's quite the pensive pose for Nellie Fox.

Other stuff: It was a great year for Chicago as both of its teams produced major league baseball's MVPs. It was the second straight MVP award for Ernie Banks. 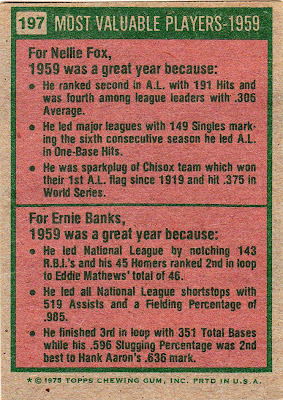 Back facts: Good stats for Nellie Fox, but I'm wondering if the White Sox's first World Series appearance since the 1919 Black Socks had anything to do with Fox's selection.

Other blog stuff: Kim Fields, a.k.a. "Tootie" on The Facts of Life, was born on this date and is a shocking 41 years old.
Posted by night owl at 3:20 AM

Not TOOTIE! I am getting old. That Nellie Fox hit a lot of singles.

I feel old too. And next year Webster turns 40.