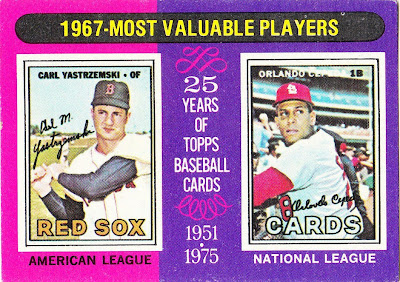 Card fact: Topps' 1967 set design is another one of those simple designs from the '60s. However, unlike some of the others, I like this design a lot. It does a great job of putting the focus on the photo, and I like the large team names at the bottom that seem to anchor the card. It has some things in common with the 1988 set, which I also like.

What I thought about this card then: This was one of my early pulls in 1975. I'm not sure if it was in those very first three packs that I bought. To this day, when I think of Carl Yastrzemski or Orlando Cepeda on a baseball card, the 1967 cards are what spring to mind.

What I think about this card now: I can't figure out what Cepeda is doing.

Other stuff: By coincidence, I am conducting a poll on the other blog to determine the best 1970s Carl Yastrzemski card. Hop on over there if you haven't already. 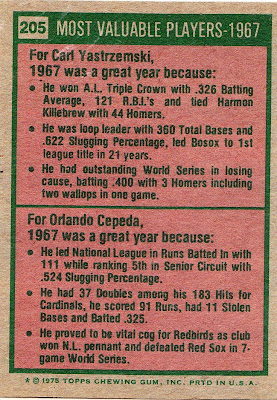 Cepeda won the MVP in his first full season with St. Louis. He was traded to the Cardinals very early in the 1966 season. The Giants received Ray Sadecki in exchange. That was a rather lopsided trade, although Cepeda had been troubled by knee problems prior to the deal. I'm not sure exactly what went down. It seems like there is more to it than that.

Other blog stuff: Here is the card that a pulled out of a waxy pack when I was 9: 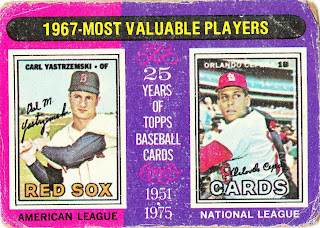 I wonder how many guys have won the MVP after going to another team via trade or free agency. I don't wonder enough to look it up at the moment though. It's late.