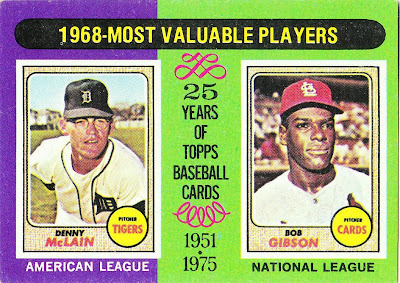 Card fact: Topps features the 1968 set design, or the "burlap set" on this card. This is one of my least favorite card designs. But you've got to give the designers credit. It WAS different, if completely out of the blue.

What I think of this card now: Are those houses in the distance on the McLain card?

Other stuff: Nothing says "Year of the Pitcher" like both MVPs being pitchers. The only other time that has happened was in 1924 when Walter Johnson and Dazzy Vance won the leagues' top honors. 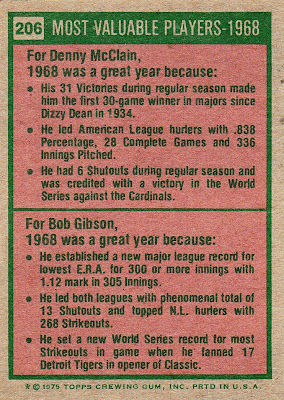 Back facts: I'll get the ugliness out of the way first. McLain's name is misspelled as "McClain."

Other blog stuff: With this card, the "green-purple" combo breaks a five-way tie at the top with its 18th card in the set. It won't last long. The top color combo will change through to the end of the MVP subset.
Posted by night owl at 12:58 AM

McClain looks like a 1960's high school science teacher. But I wouldn't have said that to his face. Gibson looks like Gibson always did. Scary.