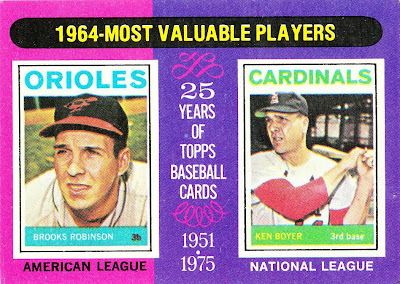 Card fact: Topps is featuring the 1964 design on this card. For me, the '64 design is notable in one important way. It marked the first time that Topps really assigned a certain color scheme to each team.

Oh, there were previous sets in which certain teams seemed to get one color combo more than the other, but there didn't seem to be any set pattern until the 1964 set. This was the point when collectors could start whining: "why did they pick GREEN for the Cardinals? There's no green in the Cardinals uniforms!" And as we well know, this became a common complaint in years to come.

Also, I'm wondering if this set featured the team name more prominently than any other Topps set. I'm thinking the 1986 set might be king in that area.

What I think about this card now: Not a lot really. The '64 set is a little too basic for my tastes. It's all right.

Other stuff: This was not the only time that two third basemen were voted MVP. It also happened in 1980 with George Brett and Mike Schmidt. 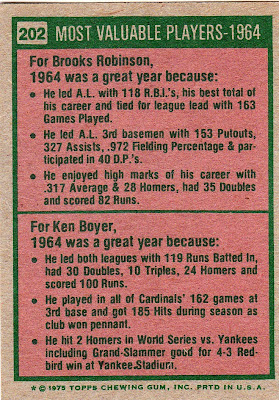 Back facts: Boyer did have the numbers to win the MVP award, but he is another guy who makes me think how much a team's trip to the World Series was tied to whether a player won the MVP before the days of multiple playoff rounds. Nowadays, you have no idea which team will get to the World Series by the time MVP votes have to be made. But back then, voters knew who the two World Series teams would be when they cast their votes.

Other blog stuff: Thirty-one years ago today, the Phillies and Cubs played a 23-22 game at Wrigley Field. The Cubs' Dave Kingman hits three home runs and Bill Buckner has a grand slam and seven RBIs, but the Phillies win after Mike Schmidt hits the second of his two home runs in the 10th inning. I vividly remember reading about this game in Sports Illustrated.
Posted by night owl at 2:06 AM

That Phils/Cubs game was a dark day for the ERA stat. Making sense when it comes to color scheme/team doesn't seem to be high on Topps list when designing cards.

Pink is probably a questionable color choice for any team.

My first year collecting was 1979, and as a Yankees fan, I enjoyed the fact that all the Yankee players were pretty easy to find by looking for an orange banner. What wasn't cool was busting wax, flipping quickly through the cards, and seeing a Padres player. Never mind that the '79 Padres set has more HOFers than the '79 Yankees (or that future Yanks Perry, Shirley and Winfield wer among the players), that didn't matter to a 6-7 year-old Yankee fan.