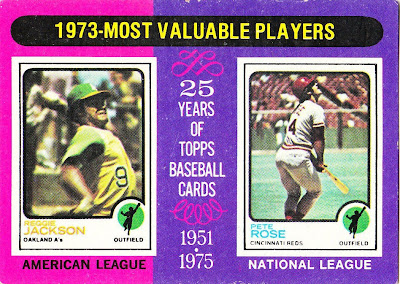 What I think about this card now: That is really an unfortunate photo of Reggie Jackson. You can barely tell it's him. Also, seeing Pete Rose listed as an outfielder is strange to me. 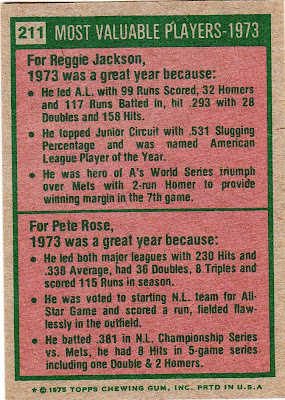 Back facts: What is the "American League Player of the Year"? Isn't that the AL MVP award? I don't understand.

I love the '73 set for just that reason...the crazy action shots. After so many years of posed shots, it was a nice change. Unfortunately you end up with some shots like Reggie which are so out of focus it's crazy. Stevie Nicks always scared me as a kid.

When I look at the 73 Reggie Jackson card, I see Fred Sanford from the TV show Sanford and Son sliding into home. WOW!!!!

It's a shame that both MVPs were represented by such unfortunate photos on those cards. Reggie looks like an old man passing a kidney stone and Rose looks like he's doing something I really shouldn't describe here...

I adored Stevie Nicks back in the day, and once dated a girl who looked a lot like she did on the back cover of the Rumours LP.

Way late with this but just in case... Player of the Year awards were given out by The Sporting News back then, not MLB.