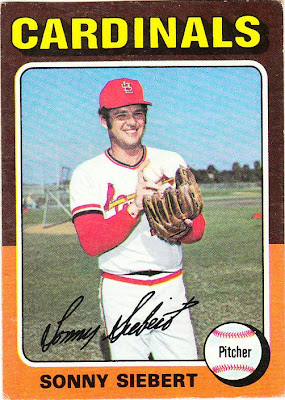 Card fact: This is the final Topps card issued of Sonny Siebert during his career.

What I thought about this card then: This card amused my brothers and I. We thought "Sonny" was a strange name and the guy pictured on the card must have been odd to accept being called "Sonny." Look at him smiling about his silly name!

What I think about this card now: I think we treated Sonny unfairly as kids.

Other stuff: Siebert started out as a regular in the Indians' starting pitching rotation during the 1960s, then established himself as a reliable starter for the Red Sox in the early 1970s. He was a two-time All-Star.

Siebert also swung a respectable bat. (He began his pro career as an outfielder). In 1971, he had one of the better hitting seasons for a pitcher, delivering six home runs and 15 RBIs and batting .266 in 79 at-bats. Two of those home runs came in one game, and he was the last A.L. pitcher to hit two home runs in a regular season game.

At the end of Siebert's career, he bounced around between the Rangers, Cardinals, Padres and A's. 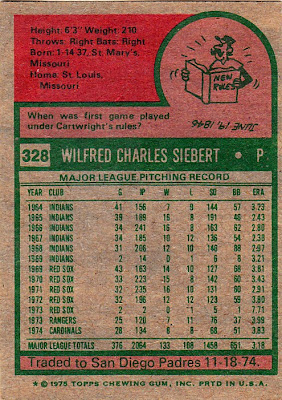 You can see that Topps squeezed in that Siebert was traded to the Padres, but it was too late for it to get a photo of him as a Padre. In fact, by the time some collectors pulled this card, even the write-up on the back was outdated, because Siebert was traded again, to the A's, in May of 1975.

Other blog stuff: OK, it's time to finally name this "brown-orange" color combo. There is a poll on the sidebar. The suggestions were all basically mentioned by commenters. I will go with whatever receives the most votes.
Posted by night owl at 2:43 AM

You can tell by that smile that he has no idea this will be his last card. What a shame. I must now find out if he has a Rangers card in the 1974 set...Nope. Even though he played with the Red Sox and Rangers in 1973, his 1974 card shows him with the Cardinals (although you can't tell which uni he's wearing).

My Uncle was named Sonny (his real name was Walter Jr.), so I was quite fond of Siebert's name. I only recall seeing his name on checklists, however. Don't think I ever got a card of his.