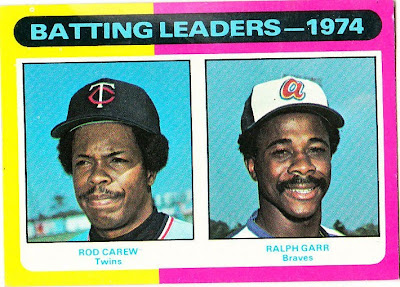 Card fact: This card begins the third subset in the 1975 Topps set. It's the league leaders subset. All of the cards have the pink-yellow (marshmallow-peep) borders.

What I think about this card now: I wonder how Topps obtained the photos for the leader cards? Were they just photos taken from the time when it took the photo for the player's card, or did they obtain them some other way?

Other stuff: This subset marked the return of the league leaguers to the regular Topps lineup. Starting in 1961, Topps featured league leaders every year in its base set through 1973. Then, in 1974, the leaders were scrapped for the Aaron retrospective and a group of All-Star duos cards.

Topps would feature league leaders from 1975 through 1984 before booting the series again in 1985. League leaders disappeared from Topps issues for quite awhile after that. 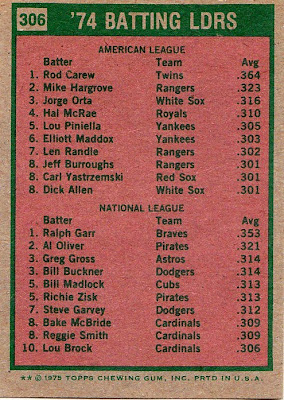 Back facts: Looking at league leaders 35 years later is fascinating. My favorite part is picking out names of players who you wouldn't figure to be in the top 10 of a certain category.

For me on this card, the surprises are Jorge Orta placing third in the American League and Greg Gross third in the National League.

As you can see, Carew and Garr were way ahead of everyone else. This was Garr's first and only batting title, while Carew was working on the fourth of seven in his career.

Other blog stuff: Here is the original card that I pulled back in 1975: 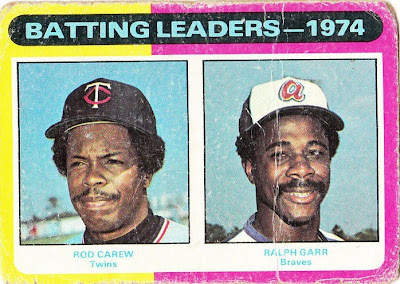 Even as a wee-one, I did a fairly good job of protecting my cards from the elements. There were relatively few with creases. But this is one that managed to fold in on itself.
Posted by night owl at 12:32 AM

That pink and yellow across the top is an attention grabber (read: blinding). How many of these are there?

I notice the Rangers had three guys on that list...all that hitting and no pitching.

There are eight of them, Brian. Get out the sunglasses.

I'm just kidding. I really like the almost daily color change for the border. It's a groovy (like the set) idea.

Wow. That is one awful mustache on Rod Carew. I'm surprised to see Mike Hargrove as the #2 hitter in the A.L., even if it was a distant #2.