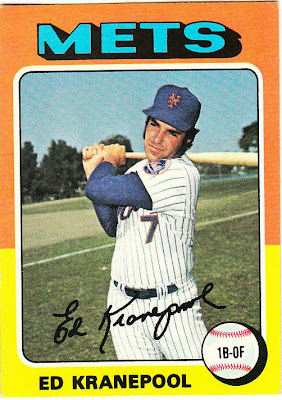 Card fact: With this card, 12 of the 13 Mets cards shown so far feature colors that match with the Mets' colors. Either a border color, or the team lettering color, or both, is blue or orange. You can't say that about the other teams.

I think it's a plot. Topps always seemed to show favortism toward the New York teams. Usually, it's the Yankees. But in 1975, the Mets ruled New York.

What I thought about this card then: Ed Kranepool was my grandfather's favorite player. He would watch the Mets games, and on Sundays my family would come to visit and I'd plop down on the floor and watch Ralph Kiner, Lindsey Nelson and Bob Murphy broadcast the games. My grandfather didn't say much, so it was hard to tell who he liked and who he didn't. But I know he liked Kranepool.

I didn't have this card, but one of my Mets-loving friends had it. As with all Mets cards then, it was cool.

What I think about this card now: You have to be doing something right to wear the No. 7.

Other stuff: Growing up, it was just understood that Kranepool was "the man" among the Mets. He was the first notable player to come out of the Mets' organization. Even though he rarely held a starting role, he played with the Mets longer than anyone (18 seasons). He never played with another team. He still holds the team record for career games played.

Later in his career, his role was reduced to mostly that of a pinch-hitter. But he was still considered the heart of the Mets and always popular with Mets fans. It helped that he was born in the Bronx. 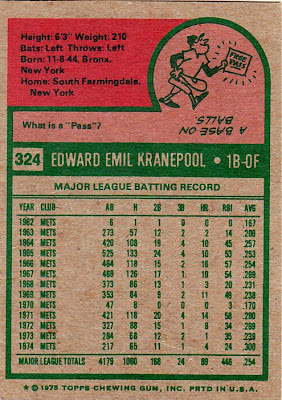 Sadly, I don't remember Ed for his playing. The end of his career came as I was getting into baseball. Looking up info on him, I found this quote about him that made me laugh.

"He's only seventeen and he runs like he's thirty."
—Casey Stengel, on why he kept Kranepool on the bench in 1962.

I don't know if Stengel really said it, but it's a good one.