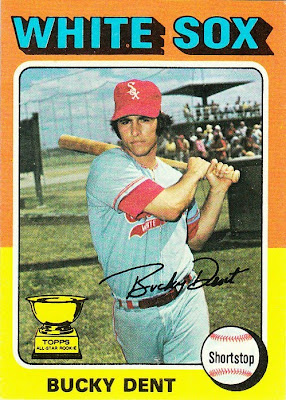 Card fact: The orange-yellow color combination had been dead last until Bucky Dent came along. Now it's tied for second-to-last.

What I thought about this card then: Somebody had this card, probably my brother. I thought it was kind of a cool shot.

What I think about this card now: Dent's card features the rookie cup logo, but he had a card all to himself in the 1974 Topps set, too. That was a bit unusual back then. The rookie cup card was often a player's first card, or his first solo card -- something other than one of those 2-player or 4-player rookie cards.

Other stuff: I do not associate Dent with his time with the White Sox (or the Rangers) at all. I think of Dent as a Yankee and I think of him upsetting Red Sox fans everywhere with that cheap-ass home run in the 1978 special playoff game at Fenway Park. I watched the game, after coming home from school, in the basement rec room of my friend, a Yankee fan. It was depressing.

Dent symbolized, for me, the undeserved attention heaped on Yankee ballplayers. Dent was a mediocre hitter at best. Most of Dent's best offensive seasons were in his early years with the White Sox. With the exception of the 1980 season -- in which he was inexplicably voted to start the All-Star Game -- Dent's numbers declined while with the Yankees. Eventually, he was traded to the Rangers for Lee Mazzilli, and his career ended in 1984.

Dent later became a manager in the minor leagues and was a bench coach with the Reds as recently as 2007. He also runs a baseball school. 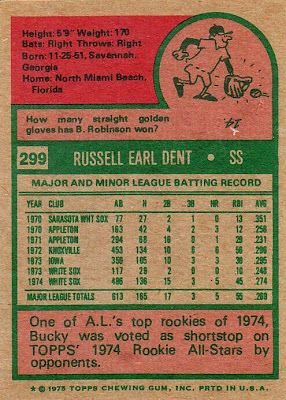 Back facts: Bill Robinson played at this time, but I am going to go ahead and assume that by "B. Robinson," the cartoon means Brooks Robinson.

Also, did you know that not only was Bucky Dent's first name Russell, but that the last name he was born with was "O'Dey"?

Other blog stuff: We have our shortstop for the Topps All-Rookie team. Here is what we have so far:

Bucky Dent is the poster child for people assuming he was great because he was a Yankee. Also, one defining moment that is replayed every time the playoffs roll around puts his name in people's minds.

The red White Sox uniform has always been my favorite.

Good stuff! Also, little remembered is the fact that Bucky tried out an acting career by playing (of all things) a Dallas Cowboys QB in the hokey 1979 made-for-TV movie "The Dallas Cowboy Cheerleaders." As you might guess, his acting was less than convincing.

those little gold cups meant everything to me back then.....bucky dent, barry foote were STARS!!!

bucky also had a good name ...all american (captain american side kick) to help propel him to fame