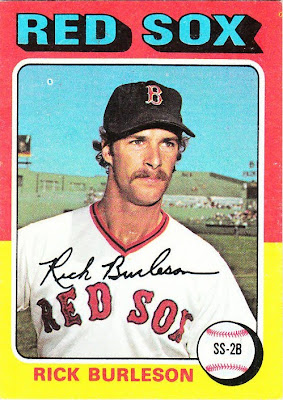 What I thought of this card then: Didn't see it. But his 1976 Topps card features an almost identical photo, and since I saw that, I didn't miss much.

What I think of this card now: A nice view of Fenway Park.

Other stuff: Rick Burleson, a.k.a, "The Rooster," may have been my favorite player on those Red Sox teams of the 1970s. Our family followed that team closely, since the team was the favorite of both my brother and father. It was my favorite American League team, too.

I liked Burleson because I always gravitated toward the second-banana types. Burleson was a consistent performer at shortstop, playing in a lot of games for the Red Sox between 1974-80, but overshadowed by Yaz, Rice, Lynn, Boomer, Fisk, etc. Burleson put up a lot of hits, although his offensive stats were probably a bit overrated according to today's standards (a rather low OBP most years). He was voted the starting shortstop in the 1977 All-Star Game, and his '78 Topps card with the All-Star shield was one of my favorites as a kid.

Burleson was later traded to the Angels in an off-season deal that also sent Butch Hobson to California for Carney Lansford, Mark Clear and Rick Miller. Burleson had one decent season for the Angels, then hurt his arm and had trouble getting into the lineup for the next few years, until retiring after the 1987 season.

He has worked as a coach, mostly in the minors, since his playing career ended. 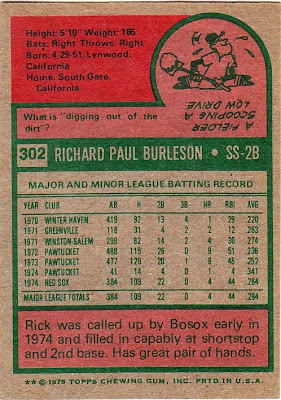 Back facts: I'm glad Rick has a great pair of hands. Those infielders with three or four hands freak me out.

Other blog stuff: Two players in this set -- Frank White and Doyle Alexander -- were both born on this date in 1950, meaning they are each 60 today.
Posted by night owl at 12:51 AM

That hole on the cartoon looks the one the Rangers are digging.

I like the Fenway view too.
I'm watching the Dodgers on ESPN right now. Just sayin'.

I was 9yrs. old at Comisky park in Chicago and asked "Mr." Burleson for an autograph. "Mr." Burleson looked into the eyes of a nine year old fan and said "NO WAY" as he spit out a wad of tobacco. He is nothing more than a conceited jerk. I relish the fact that no one remembers his name. I do remember him but as a complete jerk, as I'm sure many other fans do. I would be interested to hear what "Mr." Burleson would say if his 9yr. old son or grandson, was treated this way by a "real" major league player. He is, and always will be, a first class jerk to me and my family. "No way" Mr. Burleson, No way."

wow - who the f would say that....oh just another conceited pro athlete.....don't we wish they could all be as nice as ken rudulph?