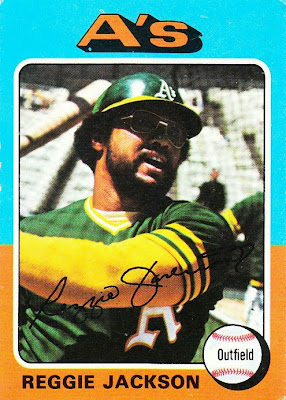 What I thought about this card then: I recall having a Jackson card that had been ripped into pieces and then taped back together. Without remembering the whole story (probably because I blocked it out), I know the destruction of the card had something to do with a friend of mine who was a big A's fan, but not a very pleasant kid. I don't know whatever happened to him, but I'm quite sure he ended up having a prison record. Anyway, he probably ripped it up in some sort of jealous fit.

This card is probably in the top five cards I think of when I think of the first set I ever collected. It was a super cool card. It helped that the blue-orange border was my favorite color border in the set.

What I think about this card now: This seems to be the first card in which Jackson was presented as a larger-than-life hero. Topps took a tight action picture, shot from under Jackson, making him seem big, bad and awesome to all the little collecting kiddies.

Other stuff: I don't think I need to recite Jackson's bio. The guy was the biggest deal in sports when I became familiar with baseball and stayed that way for more than a decade. He was the guy all Yankee haters loved to hate, but there was always part of me that liked him, because he spoke intelligently, even if half of what he said was outrageous. Even as a youngster, I admired people who spoke their mind, and Jackson certainly did that.

Today, when I see him, I forget about all the Yankeeness and laughing at him as he spun down on one knee after whiffing at a pitch. I see a former great, who I like -- even if he did do an awful lot of whining back in the day. 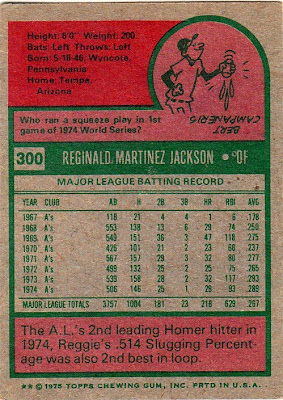 Back facts: I cannot read "Reginald Martinez Jackson" without hearing it in Howard Cosell's voice.

Other blog stuff: We've gone through another 100 cards, so it's time for another inventory session. And we're off:

"Orange-brown," which was tied for the lead after 200 cards, has moved into sole possession of first after 300 cards:

Not a single player looking up in the last 100 cards. That's hard to believe -- perhaps I missed one or two. But for now, I'll say that we're still at 9 guys looking to the heavens.

I added two more dudes who looked like dudettes to me, for a grand total of 8.

Twenty-eight players in this set have passed on, including 11 in the last 100 cards.

Hurray! Joe Coleman has company! Ed Herrmann has been added to the list for 2 players not afraid to display that tobacco bulge.

Seven more players in this set had sons who also played in the majors. So there are 15 total at this point.

Dave/David remains the leader with 15, but Bill and Jim are catching up.

34 cards of the first 300 I have in mini form for 11 percent. I may have missed one or two of these, too. When I get the time, I'll double-check. But seeing as I barely have the time for this, that probably won't happen.

OK, on to the rest of the set. Next up is a guy whose name has reappeared a few other times in major league history.
Posted by night owl at 3:11 AM

True cardboard greatness! I think we need a re-vote on the Reggie card of the '70s.

I'm going to hazard a guess and say that this photo was taken before a '74 World Series game at Dodger Stadium, simply based on the yellow box seats shown in the background.

This photo does justice to the shoulders and biceps on Reggie in his prime that were unparalleled.

Reggie's card should have an All Star insignia on it, as do all the other 1974 ASG starters from this set. The 75 set was the first I collected as a kid and I went absolutely bonkers trying to figure out who the missing 18th ASG starter was. It wasn't until many years later and the advent of the internet that I was able to determine Reggie was the missing All Star card.

Go ahead and check... you will find that only 17 cards in the 75 set have the All Star insignia. I have never seen an explanation why Topps missed this, except perhaps pure error. But pulling the All Star cards from a pack was the ultimate thrill as a kid (followed only by trading for one), with the ultimate goal of getting all 18 cards with the star in the corner. Of course, unless it made you crazy to never find that final 18th All Star card because it didn't exist.

I didn't mention it because I'm doing a running tab of the All-Stars as we get to their cards, and I plan to mention it when I get to the final All-Star card. I'll be sure to mention your comment then.