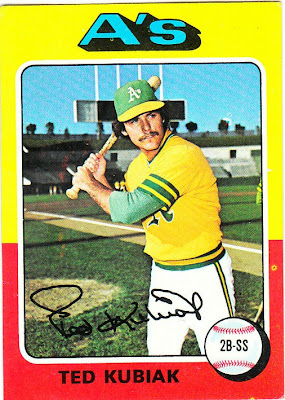 Card fact: If I had confidence in my ability to identify stadiums in cards, I would determine whether the Oakland Coliseum or Candlestick Park was featured the most often in the photos in the 1975 set. It's probably a toss-up between those two and Yankee Stadium. I do know that this photo was taken in Oakland.

What I think about this card now: Ted Kubiak was a minor league manager in my town for three seasons. We covered his team every day for the sports section of our newspaper. It was what you would call "a necessary relationship." We weren't thrilled about him, he wasn't thrilled about us. But we stayed civil most of the time. So, that's what I think about when I see this card.

Other stuff: Ted Kubiak was a good-field, sort-of-hit infielder for 10 seasons. He's known mostly for his time with the Oakland A's, as he won three straight World Series rings with Oakland as a back-up second baseman and shortstop.

Kubiak began his major league career with the A's organization when they were still in Kansas City. He was traded to Milwaukee in 1969 and played in 158 games for the Brewers during their first season in Milwaukee. Kubiak played 121 games the next year, then was traded to the Cardinals for Jose Cardenal, Bob Reynolds and Dick Schofield. After a brief stop in Texas the following year, he was dealt to back to the A's where he spent three seasons.

Kubiak ended his career with two seasons with the Padres. In fact, he was traded to San Diego for the player featured in the previous post, Sonny Siebert.

Kubiak has managed in the Oakland and Cleveland organizations for the last 20 years, including the last 15 with Cleveland. He's the manager for the Lake County Captains, a Class A team. 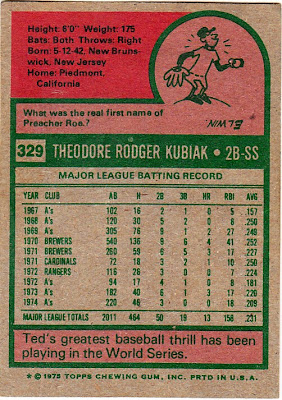 If ever a card begged for the lemon-lime color combo it's this one. I'm no expert (shocking isn't it), but I would think if you spent 15 years as a manager with one organization, you would make it above Class A ball. I don't know anything about Kubiak other than what you posted. It's possible he loves his current spot. Curious.

By the way, enjoy your break.

Good question about stadium location. It probably depends on what time frame you want to look at. My feeling is that the all time photo location is Shea stadium. It was the primary backdrop for the many of the sets of the 60's. Helped along because it was also home of the Yankees in 74 and 75.

i had more ted kubiak cards then anyone for this set.....who is this guy and why do i have 10 of him and why will no one trade me for one of mine!!!!

now that i know he has been working in Cleveland this whole time (really I KNOW i would have raised an eyebrow if heard his name on the tv or read it in the paper) i think i will drop by a lake county game and pay him a visit......perhaps give him one of the many cards i have of him