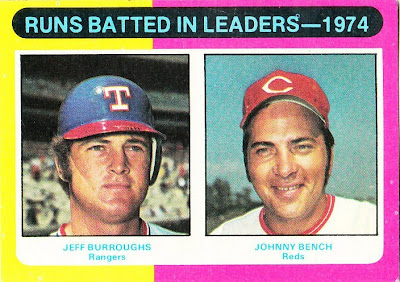 Card fact: This card puts the "pink-yellow" color combo into first place with one more card than the "orange-brown" combo. It will leave "orange-brown" in its dust by the time this subset is over.

What I think about this card now: Neither gentleman has any idea where the camera is.

Other stuff: The year 1974 was Jeff Burroughs' big breakout season, so this was his first and only RBI title. For Johnny Bench, it was his third and final RBI crown. 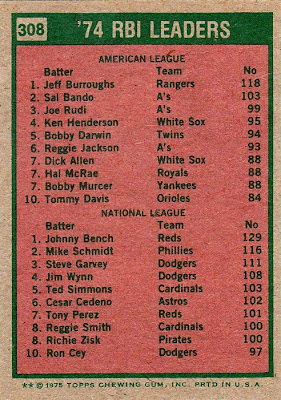 Back facts: The guys who appear in the league leaders that surprise me a bit are Ken Henderson of the White Sox and, once again, Bobby Darwin, who apparently had a tidy, kick-ass season in '74.

For the National League, they are all solid hitters again. I only wish my favorite player, The Penguin, got three more RBIs to put everyone on the list in triple figures.

Other blog stuff: The No. 1 song in the country on this date in 1975 was "Rhinestone Cowboy" by Glen Campbell. I remember hearing this song incessantly when I was a kid. I think for a little while I thought it was our National Anthem.
Posted by night owl at 1:40 AM

Sorry, I got a little excited to see Burroughs on the FRONT of the card. Is it just me or is Johnny Bench wearing a kid sized hat?

I'm surprised at Darwin's season, because I remember him flailing for the Brewers, Red Sox and Cubs late in his career.

It was an OK season, really. Darwin didn't walk much and hit only 13 doubles. But he had 7 triples.

That was a three year run of decent power numbers for the Twins, who were mediocre at best and being ignored by everyone, I guess, including the frozen denizens up here.

The NL leaders very clearly outpace the AL leaders, yet the AL had the DH, which has always translated into greater offensive numbers for that league. What gives in 1974? Were these NL hitters just that much better? It's as if the AL played 10% less agmes or something.

Looking at the back of this card I would guess that the A's probably beat the Dodgers in the World Series.

Jim, you may be interested in this article, which provides a "comparative history" of the two major leagues across the 20th century:

The author concludes that, in the early '70s, the NL was in fact vastly superior to the AL, and that this was part of the AL's motivation in adopting the DH.