Card fact: This is the second of three cards for Lou Brock in the set. I believe only Johnny Bench and Nolan Ryan appear on more cards in the set, although there are probably other players that appear three times, too.

What I thought about this card then: This is one of the three leaders cards that I had. It was my only card of Brock, as I didn't see either his own card or his highlights card. It was also my only Bill North card, as I didn't have the North base card. I liked this card a lot as I thought base stealers were the coolest players on the field.

What I think about this card now: There'd be kind of a Christmas colors thing going between the two players' uniforms. But the pink and yellow overwhelm everything.

Other stuff: This was Brock's eighth and final stolen base title, but it was also the one in which he set the single-season record for most steals with 118, breaking Maury Wills' mark. It was North's first of two stolen base titles. He also won the A.L. title in 1976. 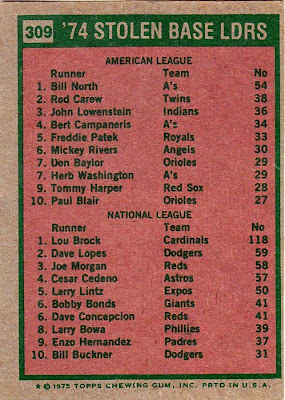 Back facts: The National League continues to dominate the offensive categories in 1974.

The interesting names on this list for me are John Lowenstein in third place in the A.L., and, of course, Herb Washington with his 29 stolen bases, all coming as a pinch-runner. For the National League, I didn't know Larry Lintz had that many in one year, nor Enzo Hernandez.

Other blog stuff: No other blog stuff today. Instead, I'll ask that you remember those who died needlessly nine years ago today.
Posted by night owl at 2:51 AM

Bill Buckner with 31 SB's is surprising as well.

Buckner had a lot of speed early in his career.

29 SBs for a pinch runner is crazy! I like the color scheme on this card. It sort of somewhat kinda sorta goes along with the uni colors.