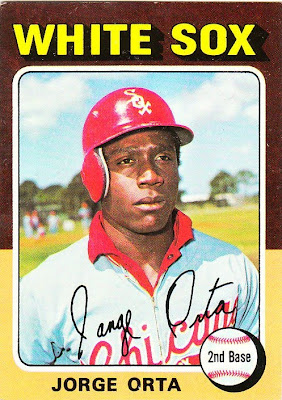 What I think about this card now: Orta looks forlorn, like the guys in the background refused to let him play with them.

Other stuff: Orta is known mostly for his part in the controversial play in Game 6 of the 1985 World Series. Orta led off the ninth inning with the Royals trailing the Cardinals 1-0 in the game and 3-2 in the Series. He  grounded a ball to Jack Clark, who tossed to pitcher Todd Worrell at first. Worrell tagged the bag before Orta, but umpire Don Denkinger called Orta safe. The Cardinals did not take it well.

The Royals went on to win that game and then won Game 7 easily when the Cardinals, seemingly still wrapped up in the call from the previous game, imploded. It was ugly.

Cover your ears, Cardinals fans, but I was rooting for the Royals in this series, so I was quite pleased.

Aside from that, Orta was a fine hitter for the White Sox throughout the 1970s. He finished second in the American League in batting average in 1974 and was utilized at several positions. He was one of my more favorite players from the '70s.

After he signed with the Indians as a free agent, Orta gradually became a platoon hitter. He had one miserable year with the Dodgers in 1982, then finished up with the Blue Jays and Royals as a role player. 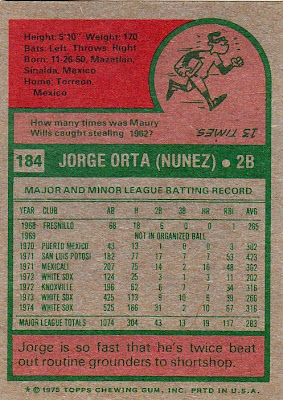 I was always intrigued every time there was a line that said "Not In Organized Ball." What was he doing? My mind reeled with possibilities.

Also, the blurb at the bottom of the card kills me. Especially in light of the controversial play in '85. "So fast that the umpire calls him safe when he isn't!"

Other blog stuff: This is just the seventh brown-tan combo card, but it pulls "brown-tan," or "chocolate-vanilla," out of a last-place tie with the red-orange combo.
Posted by night owl at 2:28 AM

"Fast" is probably relative. In 16 seasons he stole a grand total of 79 bases and he was caught stealing 60 times.

I remember pronouncing Orta's name "George" when I was a kid. Over the years I had become unsure if that's really how it was pronounced, or if I had just been saying it wrong back then because I hadn't encountered the Spanish version of the name enough to know that it isn't pronounced the same as its English counterpart.

If Orta really pronounced it "George", that leads to the question: Why? Did he always say it that way for some reason (maybe he had some English speakers in his family tree)? Did he decide that he wanted it pronounced that way when he began to play in the U.S., at least by English speakers (maybe in an effort to fit in)? Did English speakers say it wrong, and after a while he just gave up trying to correct them?

When Latin players first began appearing in the majors, in the '50s and '60s, it seemed like they would usually be given Anglicized nicknames which they would be exclusively known by. A player named Miguel might be called Mike, or a player named Antonio, Tony. This might be an example of that, although Orta came along a bit later than than the time period I have in mind.

The all-time best "Not In Organized Baseball" line belongs to former Twins pitcher Al Williams, who spent 1977 and 1978 (before reaching the majors) as a freedom fighter in Nicaragua.
Seriously.

I always thought that "Not in Organized Ball" meant "Didn't Play in a League with Reliable Stats," which makes Orta's professional record very interesting to me. First, I don't recall seeing many (if any, at all) Mexican League stats. And second, if they have stats from Fresnillo in 68 and Puerto Mexico in 70, what kind of loop was Orta playing in during the 69 campaign? Perhaps he truly was Not in Organized Ball.