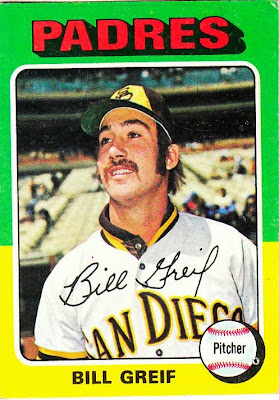 Card fact: This is the second of four Topps cards that Bill Greif would have during his career.

What I thought about this card then: I had the mini card. I didn't have many thoughts other than feeling sorry for the Padres players, whose stats were always horrid in the mid-1970s. Well, as sorry as a Dodger fan could feel, anyway.

What I think about this card now: Greif has a semi-quizzical look on his face in most of his cards. Also, the photo work is not very good. Not only is the stadium tilted in the background, but the cropping job makes it appear as Greif doesn't have arms.

Other stuff: Greif was a 6-foot-5 starter who was coming off the second of the two best seasons of his career. His stats weren't great, but he played for some horrible San Diego teams and was one of the team's more reliable starters during that period.

Greif was converted to a reliever for the 1975 season, and after a slow start in 1976 was shipped to St. Louis. The Cardinals traded Greif to the Expos in the offseason of '76, and Greif is airbrushed into an Expos cap and uniform on his 1977 Topps card. But he never played in the regular season for the Expos. He was released in March of 1977 and that was the end of his major league career. 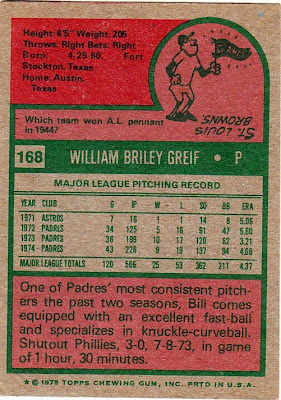 Back facts: Take a good look at the information on the back of this card. Now tell me the most interesting thing, besides the word "fastball" behind hyphenated.

That's right. The Phillies and Padres played in a game that took an hour and 30 minutes to complete! Those were the days.

Other blog stuff: If I don't come up with a name for this color combination -- or someone doesn't offer a suggestion that works -- by the time the next green-yellow card comes along, I'm putting up a poll.
Posted by night owl at 1:12 AM

Maybe the Yanks and Red Sox could take a lesson from those teams and move it along a little. At least Joe West would be happier.