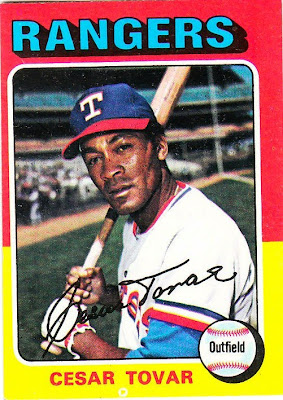 Card fact: Cesar Tovar ended his career appearing with four different teams in four consecutive years: as a Phillie in 1974 Topps, a Ranger in 1975 Topps, an Athletic in 1976 Topps and a Yankee in 1977 Topps.

What I thought about this card then: This was the first card that my brother ever pulled from a pack of baseball cards. Now that I think of it, it is the reason why Texas was his second favorite team as a kid. The card looks strange without scuff marks, because I saw it in its worn state so much when I was young.

What I think about this card now: The card border is crooked. It's a constant problem with '75 Topps.

Other stuff: The first thing I think of when I hear Cesar Tovar is that he is one of four players to play every position in one game. He did it against Oakland in 1968.

Tovar was known for his versatility. He was a valuable member of the Twins' teams of the late 1960s and early 1970s, playing at least 150 games a season, but not necessarily having a primary position. He received AL MVP award votes five consecutive seasons.

Tovar died in 1994. He is in the Venezuelan Baseball Hall of Fame. 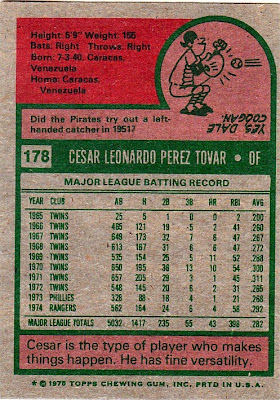 Back facts: Back-to-back cards with cartoons featuring a catcher. I've written before about my feelings concerning left-handed catchers.

Other blog stuff: Valerie Bertinelli is 50 years old today. Damn.
Posted by night owl at 1:33 AM

I was feeling great about a Rangers card popping up, another catcher cartoon and then I see that Valerie is 50. I'm getting old.

The 1971 Tovar was my first '71 Topps card. I bought it from a dime box in a coin store in the basement of the bergen mall when I was about 9 years old, a box that usually had stuff in it like 1982 fleer. Now, until then, the only "old" years I knew were 1977-81 (when my older brother collected cards...i inherited them the old fashioned way, i stole them) but this card was 13 years-old!!! It was like ancient history, it even mentioned his feat of playing all 9 positions in a game (something i then aspired to do in my lifetime and one of the rare things i actually achieved on my preadolescent bucket list). I read your blog and wonder how you can so clearly recall all these youthful things though cards, and while I may not have as many little thoughts and anecdotes, it would seem Ol' Cesar is one I do remember. and in true night owl fashion, i still have the card in all its abused black-bordered glory.

I used to get Cesar Tovar, Vada Pinson, and Tony Oliva mixed up. Probably because they seemed to be traded around between the same few teams.