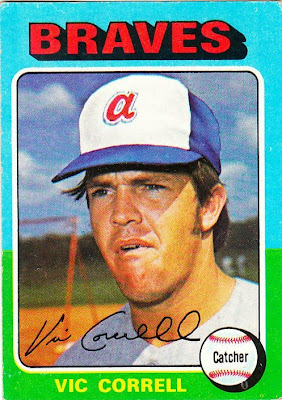 Card fact: This is Vic Correll's rookie card. Hands off. This item is going to make me a million.

What I thought about this card then: I never saw it. In fact, when I was trying to complete the set several years ago, it was one of the final cards I needed to finish off the set. Vic Correll. Who would have thought?

What I think about this card now: The Braves cap doesn't look quite right. I'm wondering if it's airbrushed. Also, I want to say he has a chaw going, so I can add it to the list, but I can't tell.

Other stuff: Correll was a career backup catcher mostly for the Braves and Reds. I remember having his 1976 Topps card -- which by the way was in horrendous shape -- and not being impressed with his batting average at all.

I'm a bit afraid to say that after reading the comments here. Apparently, Correll is a very nice man, and did some nice things. I appreciate that. I appreciate it more than a lot of people. But the folks getting all defensive on that post must not understand what it means to be a fan. Facts are facts. The guy didn't hit much in the majors. There's no crime in saying that. And, no, I don't believe I need to have been a major leaguer to state facts. I hate that stupid argument. 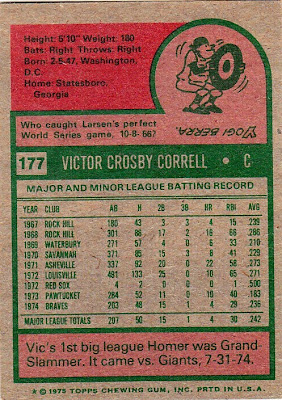 Back facts: Kind of nice that they have a cartoon about a catcher on the back of a catcher's card.

Also, a grand slam against the Giants for your first home run is fantastic. Mr. Correll, you are all right with me.

Other blog stuff: The only player in this set celebrating a birthday today is David Clyde. He was 20 when the set came out. He is 55 today.
Posted by night owl at 12:54 AM

one of the few times I get a blog hit out of another blogger researching a post....

I think you're right about the airbrushing. The right side (his left) of the cap really looks suspect to me. Also, I like the catcher on catcher cartoon. Keepin' it all in the family so to speak.

Like PatP said, I agree with the hat not looking right

Correll always reminded me of the old-school catcher guy.

I agree that the hat looks airbrushed. Correll seems to have spent the entire '74 season in the big leagues with Atlanta, but he was traded there during spring training. If Topps did most of their photography in the spring, he may have slipped through the cracks.

This would then presumably be a photo from his Red Sox days. I'm mildly surprised Topps would even have a Red Sox photo on file, since he never seemed much of threat to stick in the majors in his days in the Boston organization.