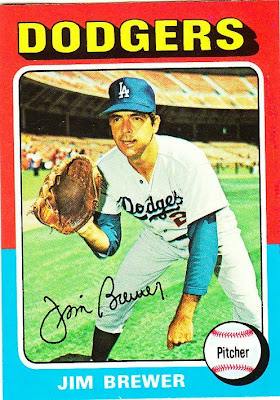 Card fact: This is the last Dodger card that I needed to complete the '75 team set. In fact, I went a long time thinking I had completed the set before realizing I needed this card.

What I thought about this card then: I never came across it, which explains why it took me so long to know it existed.

What I think about this card now: The red-blue combo (the "primary colors" combo) goes the best with the Dodgers. But there are only two Dodgers in the set that feature this combination -- Brewer and Geoff Zahn.

Other stuff: Brewer is best known for being the Dodgers' top relief pitcher during the late 1960s and early 1970s. He is among Los Angeles' all-time leaders in games pitched. Brewer's "out pitch" was the screwball, which you don't hear about much anymore.

Brewer came to the Dodgers in a trade with the Cubs in 1963. His most famous moment with the Cubs likely came during his rookie season in 1960 when he threw a pitch that brushed back Billy Martin, then with the Reds. Martin threw his bat at Brewer. Brewer picked up the bat and handed it to Martin, who punched him the face and broke his cheekbone. The Cubs ended up suing Martin but dropped the case. Brewer, however, received $10,000 in damages. 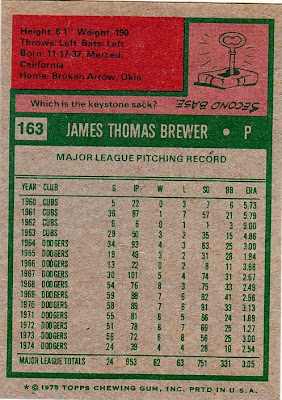 Back facts: You can see that the Dodgers got a lot of mileage out of Brewer after obtaining him from the Cubs. The Cubs received Dick Scott in return in that trade. Scott pitched four innings for the Cubs in 1964 and that was the end of his career.

Other blog stuff: On this date in 1977, the Toronto Blue Jays played their first game in franchise history, beating the Chicago White Sox, 9-5 at Exhibition Stadium in Toronto. Doug Ault hit two home runs and it snowed during the game. I watched the game on a Canadian television broadcast at my grandmother's apartment in Buffalo.
Posted by night owl at 12:56 AM

It's hard to believe, when you look at his career totals, that he was able to pitch 953 innings in only 24 games.

Billy Martin was a jerk.

Nice catch on the screwed up game total.

It's your fault really. Until I started reading blogs, yours specifically, I paid little attention to the backs of cards. That's from someone who collected cards for over 25 years. Now, I get a kick out of looking back at the older cards and seeing the true greatness of the card backs. The back is oftentimes the best part of the card.

Funny, I never knew before reading this that it snowed during that game.