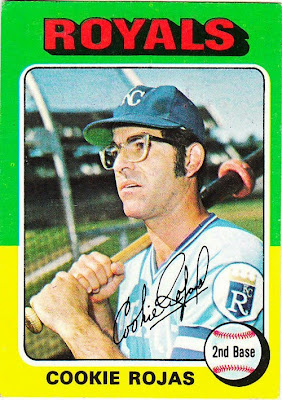 Card fact: I'm going to say this is the first appearance of a batting donut in the set. I'm too tired to research it -- I just got off of work -- so if you want to prove me wrong, go nuts.

What I thought about this card then: Unfortunately, I didn't see it.

What I think about this card now: Cookie really held onto those glasses didn't he? I think everyone gave up on those kind of frames when the '60s ended, but Rojas seemed to wear them until the bitter end.

Other stuff: Rojas is well-remembered in Philadelphia and Kansas City, where he spent most of his major league time. The infielder also had an avid following in Cuba, the place of his birth.

Rojas was a regular infielder for the Phillies in the 1960s, then was traded to the Cardinals in the controversial Curt Flood deal. Rojas didn't last long in St. Louis, going to Kansas City shortly afterward. As the Royals' second baseman, his career re-blossomed and he was an All-Star four straight years. Eventually, Frank White surpassed Rojas' Royals record for most games played at second base, but a lot of fans remain fond of Cookie. 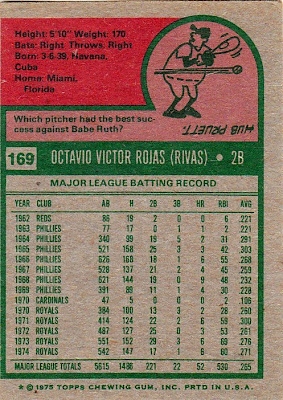 Back facts: Hub Pruett was a pitcher for the St. Louis Browns, Phillies, New York Giants and Boston Braves between 1922-32. He pitched with a unique fadeaway delivery and struck out Babe Ruth 15 of the 30 times he faced him, including 10 times the first 13 times the two faced off.

Other blog stuff: I said in the last post that if I didn't come up with a decent name for the green-yellow combo that I would put up a poll. Well you didn't know the next green-yellow card would come up so soon did you?

So there's a poll up. There are several suggestions there made by readers, as well as a couple lame suggestions by me. Please vote, or pick the last option and tell me to keep trying if you don't like any of the options.
Posted by night owl at 2:25 AM

Cookie has a donut...that struck me funny, but it's almost 2 in the morning so that has to be considered. I think the color-combo names are like finding the perfect house. You know it when you see it.

Lemon-Lime was used for the yellow-green combo.

Almost went with Sierra Mist, but I don't think there was such a drink in 75. Somehow that seems inappropriate. So I went with Lymon. Even though that might have been an 80s campaign, it seems to fit the 70s thing pretty well.