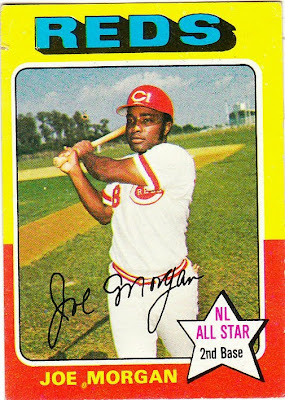 Card fact: This the first of three Reds all-star cards in the set. The Reds don't have the most, though. That honor goes to the Dodgers (Yay!)

I guess I can never go back to being 9 years old again.

What I think about this card now: That is one hell of a tilted field.

Other stuff: As just about everyone knows, Morgan began his career as a Houston Colt .45, was traded from the Astros to the Reds in a deal that turned out fantastically for Cincinnati, and helped the Reds to back-to-back World Series titles in two years in which he won back-to-back National League MVP awards. After his Reds career, he bounced around between the Astros, Giants, Phillies and A's, returning to the World Series with the Phillies in 1983.

Morgan was known for his short stature, his chicken flap maneuver before he swung at a pitch and his clutch-hitting (many times against the Dodgers, it seemed).

Even though many consider Morgan the greatest second baseman in the game, he is known more now for his broadcasting and his steadfast opposition to any kind of statistical analysis of the game. From what I've gathered, he refuses to read "Moneyball," which he has criticized several times. How can you criticize a book you won't read?

Many folks also cite Morgan for the Veterans Committee's inability to vote players into the Baseball Hall of Fame.

In short, he's not too popular with a lot of fans. 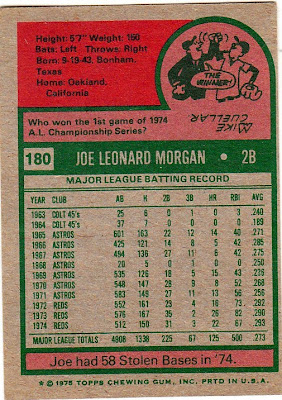 Back facts: Five-foot-7 and 150 pounds. Would they let anyone even close to a major league field these days with those kind of vitals? 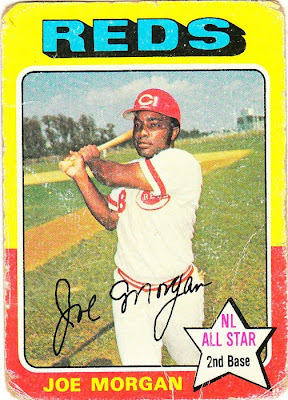 Oldie but goodie: Here is the Morgan card I had when I was 9, back when I liked the guy.

Other blog stuff: Time to add a second baseman to the all-star squad:

I try never to use the "H" word. George Harrison taught me that through his music.

See what one man's lifelong bout with idiocy can do to even the most easygoing of us?

Funny coincidence -- Joe Morgan will be on my 1976 blog tomorrow. I'm working on the post right now. :)

Five-foot-7 and 150 pounds. Would they let anyone even close to a major league field these days with those kind of vitals?

And there is no shame what-so-ever in liking the player Joe Morgan. But, sadly, Morgan the broadcaster is so terrible and uninformed, he wouldn't have liked Morgan the ballplayer. I sometimes watch ESPN SNB and wonder "here is a man who played in 2700+ baseball games and has probably watched just as many since and yet he speaks as though he has never ever rationally and analytically thought about the game even once". I find that one of the saddest things ever. It would be like Picasso not understanding art or Sam Walton not understanding retail sales.

I simply cannot listen to him call a game. It's infuriating.

Sure, he was a great player on some really great teams. He's a Hall of Famer. Newsflash JOE: YOU ARE NOT THE ONLY HOF'er IN THE WORLD.

All the walks (and the resulting stellar OBP), the great slugging percentage, boatloads of stolen bases (and a nice success ratio) - the guy is a sabermatrician's wet dream fer chrissakes!