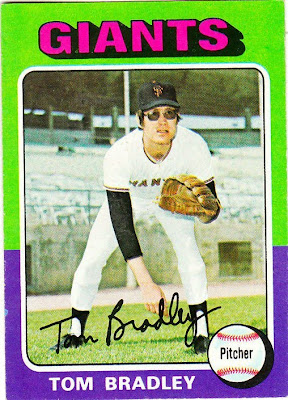 Card fact: This is one of six cards of Tom Bradley during his major league career. Fortunately, he is wearing great glasses in every single one.

What I thought about this card then: The glasses, no doubt, were my main focus. Also, Bradley's last name is the same as my brother's first name, so we thought that was a little cool.

What I think about this card now: I miss this traditional pose on baseball cards. It's almost like a three-point stance in football. This pose appeared constantly in 1970s baseball cards.

Other stuff: Bradley enjoyed three straight seasons of double-figure wins with the White Sox and the Giants, and then his career quickly dissipated. In 1971 and 1972, he struck out more than 200 batters for the White Sox, and that helped Chicago land Steve Stone in a trade with the Giants.

Bradley later became a coach and has coached on both the collegiate and professional level for a number of teams. He was the University of Maryland's baseball coach during the 1990s.

According to his wikipedia page, Bradley was the person who nicknamed Rich Gossage "Goose," which he thought described how Gossage appeared when the Goose looked in for a sign. 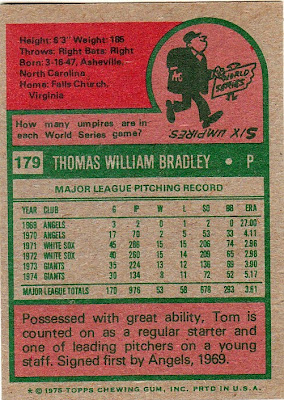 Oldie but goodie: Here is the Bradley card that I pulled from a pack when I was 9: 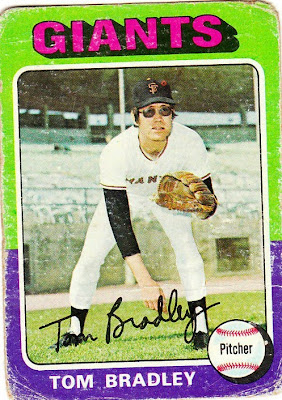 Other blog stuff: Chipper Jones celebrated his third birthday on this date in 1975.
Posted by night owl at 2:52 AM

Can you imagine Tim Lincecum in that pose? I'd take that over another leg behind the back follow through photo.