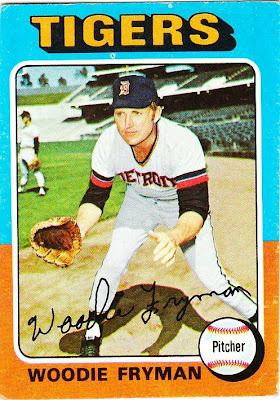 Card fact: This color combination is the least common one so far. This is just the sixth "blue-orange" card.

What I think about this card now: You know when you look at a word over and over again and soon it doesn't make sense to you anymore? That's how I feel when I stare at these fake pitching poses that appeared over and over on cards in the '70s. After awhile, Fryman just looks like some strange robot marching stiffly toward his victim. Yes, I know that doesn't make sense. That's what I'm trying to tell you.

Other stuff: Fryman pitched for a long period for the Phillies and then for the Tigers. He was a big part of the Tigers' drive toward the American League East pennant in 1972. He also pitched for the Pirates and Reds and Cubs.

But I don't remember any of that. I remember Fryman as an Expo. During the 1981 postseason, Fryman was over 40 years old and an effective and beloved reliever for Montreal. The city loved him. ABC loved him. I remember Howard Cosell babbling on and on about Fryman, the farmer's son from Kentucky, during the Expos' division series with the Dodgers. After awhile, I had had enough. I was sick of hearing about it. I didn't like Fryman anymore and I was delighted when he got lit up by the Dodgers in Game 4 of the series. Of course, Rick Monday sent Montreal home for the season with his home run in the next game.

Fryman operated a farm in Kentucky until his death in Feb. 2011 at age 70.

No offense, Woodie, but I'm glad the Dodgers got that ring. 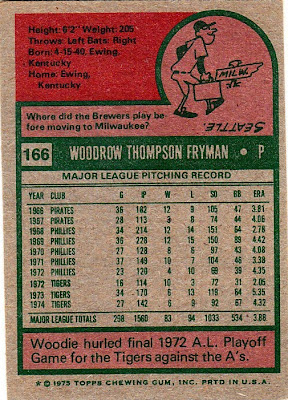 Back facts: You can see from the stats that Fryman was exclusively a starter at this stage. He didn't become a full-time reliever until his days with the Expos.

Other blog stuff: Ken Griffey Jr.'s dad, a fair player himself, is 60 years old today.
Posted by night owl at 2:26 AM

Woody almost landed on his birthday. I guess having your birthday on April 15th isn't as bad as Christmas.

Noted and updated. Thanks!

I never saw that card, and i recall him playing for the Expos in 1975.
He was my favourite reliever. We actually stood a good chance of winning if he came in for Rogers in the late innings.
And yes, he was beloved in Montreal.
I never had to endure Howard Cosell. Montreal Broadcasts were handled by Dave Van Horne for most of the years the team existed, and he was assisted by people like Russ Taylor, Jim Fanning, Duke Snider and Ken Singleton over the years. I consider van Horne the best play by play man anywhere. I understand he does (or at lkeast until recently ) Florida Marlins Broadcasts.