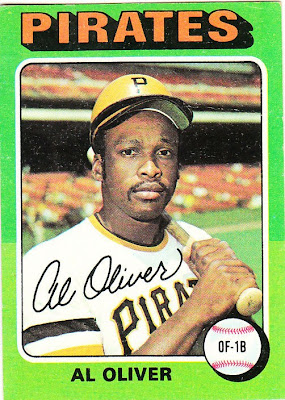 Card fact: I'm not 100 percent sure, but this photo could have come from the same shoot as his photo on the 1974 Topps card.

What I thought about this card then: I never saw it. I knew his 1976 Topps card very well though.

What I think about this card now: This is a prime example of a member of the subhelmet hat alliance. It looks a little goofy, but Al Oliver is taking it very seriously.

Other stuff: Oliver was a primary component of the 1970s pennant-winning Pirates teams. He would later become a key member of the lineup for the Rangers and Expos, but I will always think of him as a Pirate.

Oliver was your classic No. 3 hitter from the '70s. With Willie Stargell in the lineup, Oliver was the guy counted on to get on base and supply power, and Oliver could do both. He didn't have a ton of home run pop, but drove in more than 80 runs nine times and had a lifetime .303 average. He led the National League in hitting with a .331 average in 1982.

Oliver was also a solid fielder, known as "Scoop" in his later days when he played first base more than the outfield. After he was traded to Texas (in a four-team swap that landed the Pirates Bert Blyleven), he changed his uniform number from 16 to 0. I don't know why. I always thought it stood for "O," as in "Oliver," rather than the number zero, but I don't know that for certain.

Oliver is often mentioned as a Hall of Fame candidate. Oliver claimed that he was a victim of collusion by baseball owners in the late '80s, and he should have been able to extend his career past 1985, possibly obtaining 3,000 career hits. 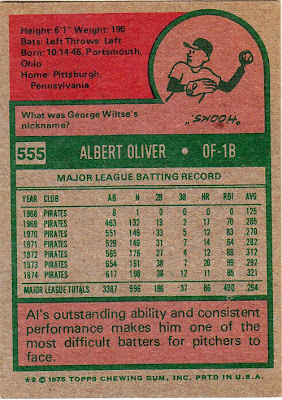 Back facts: Oliver hit .321 in 1974 with nearly 200 hits and all Topps could think to write about was some mumbo-jumbo about him being difficult to face.

Other blog stuff: Brooke Shields was born on this date 46 years ago. I cannot think of 1980 without thinking of Brooke Shields and those Calvin Klein ads. She did a number on us 15-year-old boys.
Posted by night owl at 3:11 AM

Oliver said that his uniform number was meant as an O, for Oliver.

I will always think of Al as a Ranger. He was one during my formative years. I remember Brooke too...